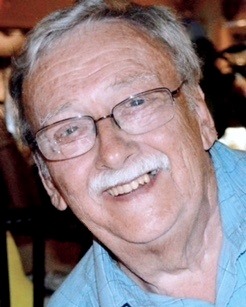 William “Bill” Knight, 87, a long-time resident of Hamden, passed away peacefully on January 12, 2023 with his family at his bedside after a courageous four-year battle with kidney disease.  Bill even beat COVID.  But Jesus called him home.

Bill was known throughout the community for so many things, including:  a wonderful and dedicated husband, father, and grandfather; a banker and business leader; a devoted Catholic and Eucharistic Minister; an instant friend to everyone he ever met; a little league coach; a recreational softball player; a superb writer; a generous volunteer at churches and hospice; a spontaneous wit with an unlimited repertoire of jokes; a life-long Yankee fan; and an extraordinary fisherman.

Bill grew up in Sturgis, Michigan, son of the late William and Felia Knight.  He is predeceased by his sister, Sharon Fricker.

Immediately after high school, Bill enlisted in the U.S. Air Force for the Korean War.  During his time in the service, he had a multi-deployment career in Search and Rescue.

After his years of military service, Bill settled in the New Haven area.  That’s where he met the love of his life, Mary Ann DelVecchio, while they worked at Safety Electrical in Hamden -- an office romance.  They were blessed with a 64-year marriage and had two children, Eric and Kimberly.

While raising his small children with Mary Ann, Bill went to night school at the University of New Haven (originally New Haven College) and earned his Bachelor’s Degree in Business and Marketing.  His first job in business was as a bank teller trainee, which was just the start of his many decades in banking.

Bill rose through the ranks in the financial industry, holding senior roles at First New Haven National Bank, Second National Bank, First Bank, and Connecticut National Bank.  He was a Branch Manager at multiple banks in Hamden, and became a cornerstone of the town’s financial community.

As many recall, Bill was one of the last great local bankers.  He took the time to get to know his customers.  He wrote loans for people because he believed in them.

Bill capped his many-decade banking career when he retired as a Vice President of Commercial Lending for Connecticut National Bank.  But, even in retirement, he continued to provide financial wisdom to his fellow Hamdenites, working on Business Development at Quinnipiac Bank & Trust.

Bill was known for his unlimited spirit of volunteerism.  He was a coach for youngsters in the Hamden Father’s Baseball League.  He volunteered at several churches, lending his financial insights and experience.  He volunteered at the St. Raphael Cancer Center and Connecticut Hospice in Branford -- providing support, companionship in final days, as well as Communion to those requesting the sacrament in his capacity of Eucharistic Minister at Hamden’s Blessed Sacrament Church and St. Ann’s Church.  These are just a few of countless examples of Bill’s genuine altruism and perpetual assistance to the community.

Bill was also a member of the Knights of Columbus, Kiwanis Club, and Rotary Club.

For many years, Bill put his lifelong love of swimming to good use for charity, participating in the annual St. Vincent’s “Swim Across The Sound,” a fund-raiser for the hospital’s oncology programs and to provide financial aid to cancer patients and their families.

In 1997, Bill had his own battle with cancer -- and won.  He didn’t skip a beat in his support of the community; in fact it further energized his efforts in charitable causes related to cancer treatments and family support.

Above all, nothing could surpass Bill’s love of family.  He was the family’s cheerleader and biggest fan. He was there when a family member needed a pep talk before a speech or an important meeting, and was eager to hear how it went.  He cheered them on at sporting events, recitals, award ceremonies, and even a rocket launch!

Bill’s love of people and zest for life touched countless individuals in his over 87 years of living.  A light may have dimmed here on Earth.  But heaven has gained a brilliant beacon of joy and love.

Besides his wife, he is survived by his two children, Eric Knight and his wife Elsie Mathews; Kimberly Knight and her partner Paul Engengro; two grandchildren, Emily Schwarz and Drew Schwarz; and several nieces and nephews.

Due to COVID-19 concerns, there will be no calling hours.

Arrangements - A Mass of Christian Burial will be celebrated Thursday, January 19, 2023, at 10:00am at St. Bridget’s Church, 175 Main Street, Cheshire. Friends are asked to meet directly at church and all are welcome to attend. Burial, with full military honors, will follow at All Saints Cemetery, North Haven. The Alderson-Ford Funeral Home of Cheshire is assisting with arrangements.

In lieu of flowers, the family requests that donations be made to the National Kidney Foundation (www.kidney.org) and the American Cancer Society (www.cancer.org).