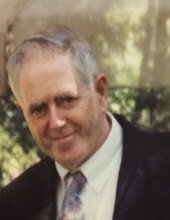 MIDDLEBURY- William H. Honegger Jr., 88, passed away Monday, February 10, 2020 at Waterbury Gardens. He was the husband of Erma (Fairchild) Honegger whom he was married to for 60 years.

Mr. Honegger was born May 26, 1931 in Waterbury son of the late William H. Sr. and Hazel (Wheeler) Honegger.

Bill was a veteran proudly serving in the United States Army during the Korean War where he was a recipient of the National Defense Service Medal. William worked at both American Brass, and the Waterbury Republican American prior to his retirement.

Arrangements- Calling hours for Mr. Honegger will be held 11 A.M to 12:45 P.M, Friday, February 14, 2020 at The Alderson-Ford Funeral Home of Naugatuck, 201 Meadow St, 06770. A service will be held at 12:45 P.M to conclude calling hours. Burial will be held at the convenience of the family in Grove Cemetery. Donations in his name can be made to Special Olympics Connecticut, 2666 State St #1, Hamden, CT 06517.
To order memorial trees or send flowers to the family in memory of William H. Honegger Jr., please visit our flower store.