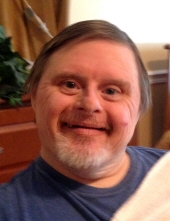 Mr. Honegger was born August 28, 1961 in Waterbury, son of Erma (Fairchild) Honegger and the late William H. Honegger Jr. Billy was a graduate of Pomperaug High School and a former athlete in Special Olympics, where he won many medals. He lived with his parents in Middlebury until moving to the nursing home where his parents later joined him.

Arrangements –A private graveside service will be held at the convenience of the family in Grove Cemetery and there are no calling hours. The Alderson-Ford Funeral Home of Naugatuck is assisting with arrangements. Memorial contributions may be made to the Middlebury Volunteer Fire Department, 65 Tucker Hill Road, Middlebury, CT 06762 or Special Olympics Connecticut, 2666 State Street, Suite #1, Hamden, CT 06517-2232. For online condolences, to share a story or a photo, please visit www.fordfh.com.
To order memorial trees or send flowers to the family in memory of William H. "Billy" Honegger, please visit our flower store.