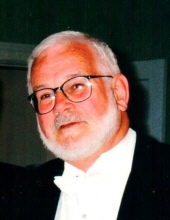 CHESHIRE – William Frederick Suter, 90, passed away May 7, 2022 at the Lutheran Home of Southbury.

Mr. Suter was born April 16, 1932, in Tarrytown, N.Y., the only child of the late Frederick Wilhelm and Violet (Marshall) Suter and grew up in North Tarrytown, now Sleepy Hollow, New York.

Bill graduated from North Tarrytown High School in 1950, and shortly after, joined the United States Navy, serving as a sonarman aboard the USS Rooks (DD804), during the Korean Conflict. In 1952, he married his high school sweetheart, Jean Gleason and in 1959, moved to Connecticut, where he was employed as a printer for many years. In 1965, at the age of 33, he entered college part-time, and graduated in 1972 from Southern Connecticut State College, and became an English teacher at Amity Junior High School (Bethany) until his retirement in 1992.

In addition, Mr. Suter was a member of the Unitarian Society of New Haven, the Cheshire Kiwanis, the Cheshire Land Trust, the Cheshire Senior Center Scrabble Club, the Cheshire Historical Society, the Friends of Fort Nathan Hale, and the Swiss-American Association of Connecticut.

Before stenosis and arthritis made it impossible, Bill was an avid gardener and traveler.

Arrangements: A Graveside Service will be held on Thursday, May 12, 2022 at 11:00 A.M. at Sleepy Hollow Cemetery, 540 North Broadway, Sleepy Hollow, N.Y. The Alderson-Ford Funeral Home of Cheshire is assisting with arrangements.

To order memorial trees or send flowers to the family in memory of William F. Suter, please visit our flower store.