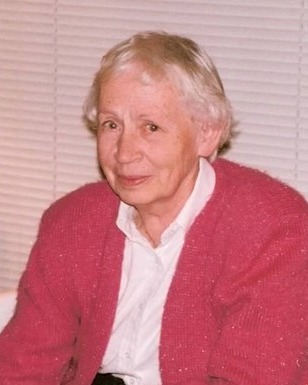 Wilhelmina Edna (Eckey) Terry “Mina”, passed away peacefully on November 15, 2022. She was born on November 27, 1920, in Mt. Union, Iowa. She was the daughter of Nellie G. (Kuhlman) and Rudolph Peter Eckey. Mina graduated from Earlham College in 1942, with a degree in Home Economics. Wilhelmina met her husband, Robert Lee Terry, at Earlham College, and they were married on March 7, 1943.

While her husband served in the Army, Mina worked in several Philadelphia area businesses, including the Human Resources Department at the Campbell Soup Company. When Robert returned from the service, he earned a Ph.D. in Zoology from the University of Pennsylvania. His first teaching position was at Union College in Schenectady, NY, where their daughter, Martha Lee Terry, and son, James Robert Terry, were born. They then went to Iowa State University in Ames, Iowa, where Stephen West Terry was born. In 1952, they moved to Waterville, Maine, the home of Colby College, and Robert taught there until his retirement in 1983.

As was the culture at the time, Mina was a stay-at-home mom while her children were growing. She enjoyed a memorable year as a long-term substitute Home Economics teacher at Waterville Junior High School, an opportunity to get to know her daughter and her daughter’s friends in a different light. She also enjoyed a brief period of teaching nutrition at the Maine School for Practical Nurses, as well as a short time as a real estate agent. Somehow, family demands seemed to intervene in her working life as she cared for her mother-in-law for several years, and her mother, for a shorter time.

Mina was involved in the community life of Waterville as PTA President at Averill School, the Waterville AAUW, Thayer Hospital Auxiliary volunteer, and the Colby College Art Museum. She worked with newcomers to Waterville as a Literacy Volunteer. She was a frequent chaperone for her children’s school field trips, and she accompanied the Colby Outing Club on some memorable adventures during her husband’s years as adviser to that group.

A few years after her husband’s death, Mina moved to Cheshire, Connecticut, to be closer to her children and grandchildren.

She is survived by her daughter, Martha Terry Djang and her husband Fred; her son, Stephen Terry and his wife Andrea; three grandchildren: Leslie Jasmine Djang, Peter Chen Djang and Robert Yuan-Hsi Djang; the extended joys of her life - two great-grandchildren, Mia Leigh Djang and Austin Robert Djang; and her nephews, Paul Stevens and Mark Stevens and their families. She was predeceased by her son, James Robert Terry; her husband, Robert Lee Terry; her sister, Mary Eckey Stevens; her nephews, Robert David Stevens and Thomas Richard Stevens; and her niece, Elizabeth Ann (Stevens) Briggs.

Family and friends may pay their respects on Tuesday, November 22, 2022 from 5 p.m. to 7 p.m. at the Alderson-Ford Funeral Home of Cheshire, 615 South Main Street. Burial will be private. In lieu of flowers, please consider a donation to Connecticut Children’s Foundation, Inc., PO Box 412901, Boston, MA 02241-2901 or online at www.connecticutchildrensfoundation.org/ways-give