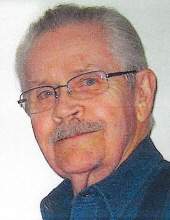 Vern was born September 9, 1933, in Waterbury, the son of the late Vernon and Rosalie (Morin) Vosburgh. He was a lifelong Cheshire resident, attending local schools before continuing his education at the University of CT at Storrs. For many years he worked in the Copper and Brass Industry. In addition, he had been in Manufacturing, Sales, and Warehousing throughout the North East and Mid-West.

As an entrepreneur, he was a co-founder, partner, and Vice President of Copper Valley Metals Corp. of Waterbury and its subsidiaries. He was also the founder and President of the former New England Tennis Courts Inc. of Cheshire. Throughout the years he had been associated with the Alderson Funeral Homes.

He was a proud Korean War Veteran, serving 143rd Tank Battalion, 7th Army, and 508th MP Battalion in Germany. He was a current member of both the American Legion and the Veterans of Foreign Wars.

Vern was a former 32nd degree Mason and Shriner. He enjoyed watching UCONN Basketball with friends.

Besides his wife of 67 years, he is survived by his daughters Lisa Hoffheins and her husband Robert, Jennifer Krass and her husband Larry; his son Gregory; his granddaughters Myriah and Tamrah; his grandsons Ehren, Jeffrey (Toni) and Kurt; his great-grandchildren Devon and Mia; as well as his nieces and nephews. In addition to his parents, he is predeceased by his sister Beverly Murray.

Vern’s family would like to express their heartfelt thanks to his caregivers Sam, Linda, and Myriah as well as VNA Hospice for all of their wonderful care.

Arrangements – Funeral services and burial will be held at the convenience of the family and there are no calling hours. The Alderson-Ford Funeral Home of Cheshire is assisting with arrangements. Memorial contributions may be made to the Wounded Warrior Project, P.O. Box 758517, Topeka, KS 66675-8517.
To order memorial trees or send flowers to the family in memory of Vern R. Vosburgh, please visit our flower store.