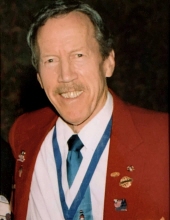 Thomas Jackson Williams, Sr. of Wallingford, CT and Palm Springs, FL has fallen asleep and is awaiting the return of our Lord and Savior Jesus Christ. He is predeceased by his wife, Harrietta Ann (Harianne) Williams, and daughter, Minna Wagner Williams; the son of the late John Leslie “Luke” Williams and Gladys Mifflin Williams and brother of the late Donald K. Williams.
Born in Boston, MA on February 25, 1933, and to rest on February 21, 2022, Tom spent most of his life he lived in Cheshire and East Haven CT.

He graduated from Hamden Hall in 1951, served in the United States Airforce during the Korean conflict and in the reserves.
Tom was always doing something to help others. A lifelong member of Kiwanis including past presidents and LT. Governor of CT, he started the Madison Kiwanis Club, was a proud member of the Masonic Lodge, the Elks, and Veterans of Foreign Wars.

He started and operated Cheshire Tree Service in 1957 with his wife, Harianne, until his retirement.
On the property that he raised his family in Cheshire, CT affectionately called “Christmas Tree Ridge”, he planted and grew Christmas Trees and this tree farm was known for many years as “Williams Christmas Trees”. The entire family was involved in the process of helping seekers hand-pick and freshly cut their trees for the holiday. As well, he donated seedlings to 4th graders in the Cheshire schools every Arbor day for many years.

He was an avid Boston Red Sox fan to the bone and was able to see them win the world series. Ted Williams was his idol.
Tom will be missed on this earth but he will always be in all of our hearts and lives and we will see him again in eternity.

Arrangements - Calling hours will be held at Alderson-Ford Funeral Home of Cheshire, 615 S. Main St. on Friday, May 20th from 4 to 7 pm. A Celebration of Life will be held at The First Congregational Church of Cheshire, 111 Church Dr. on Saturday, May 21, 2022, at 10 am. Burial will be held at the convenience of the family. Memorial contributions in Tom’s memory may be made to The Arbor Day Foundation, 211 N. 12th St., Lincoln, NE 68508 https://arborday.org or to The Cheshire Kiwanis Club Foundation PO box 461, Cheshire, CT 06410

To order memorial trees or send flowers to the family in memory of Thomas Jackson Williams Sr., please visit our flower store.