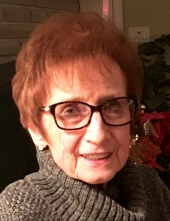 CHESHIRE - Therese Reckmack Sataline, widow of the late Dr. Lee R. Sataline and nearly a lifelong resident of Cheshire, died on March 2 in Southington after a short illness at age 93.

Born on April 5, 1927 on Horton Avenue to the late Mary Patton and John Reckmack, Mrs. Sataline would go on to live and later marry her husband and raise their two daughters and countless cats on Squire Hill Road for nearly 50 years.

She was a graduate of Commercial High School in New Haven and worked at the United Illuminating Company there, serving as secretary for the chairman of the board. After, she was a homemaker who moved with her husband to Dayton, Cleveland, Toledo and Bethlehem, PA, before returning and settling in Cheshire in 1972. She would later work as an officer manager in the private practice of her husband, Lee R. Sataline, M.D. in Cheshire.

The two met when the future doctor was a student at the Cheshire Academy and befriended a kitchen helper who had a beautiful daughter with brilliant red hair. After the physician was graduated from the University of Bologna, the couple married at St. Peter’s Basilica in Vatican City. They were members of St. Bridget’s Roman Catholic Church in Cheshire.

Mrs. Sataline was devoted to her plants (including raising the snippings she purloined during her travels to Italy), her home, and especially her kitchen, where she made nightly gourmet meals for her family. A teenage fan of a gawky Italian-American singer, Mrs. Sataline nourished a lifelong love for Frank Sinatra.

She devoted much energy to her cats, having raised a series of stray, barn and rescue cats. She is predeceased by Sam, Muffin, Morris, Theo, Walter, Athena, Lucy, Scherzo, Nora, Sally, Harry, Lily, Pushkin, Boris Yeltsin and Leo.

She was never shy about expressing her opinion. Nor was she bashful about sharing her thoughts about fashion, food, the arts, and politics. She instilled in her daughters that one should never ignore their hair nor their attire. She was very proud of her Irish and Austrian ancestry. Mostly, she was a lady through and through.

She is survived by her daughters, Laura Sataline Albee of Southbury; Suzanne Sataline of Cheshire; her son-in-law, Denny V. Albee; her granddaughter, Taylor Therese Albee; two nieces Susan Reckmack Savelle and Sheila Reckmack Mesite; and feline Miss Azerbaijan, originally of Baku. She is predeceased by her beloved husband Lee, who died in 2014, her grandson Hunter Christian Albee who died in 2015 and her siblings Raymond, Robert, and Bernice.

The family would like to extend their heartfelt thanks to the entire team at Southington Care Center, MidState Medical Center, and to Dr. Schwartz, Dr. Chester Brown, Dr. Ralph Prezioso, and Dr. Henry Ward for their compassion of heart and world class care.

Arrangements - Burial will be private and at the convenience of the family at St. Bridget’s Cemetery. The Alderson-Ford Funeral Home of Cheshire, 615 South Main Street, is in charge of arrangements.
To order memorial trees or send flowers to the family in memory of Therese R. Sataline, please visit our flower store.