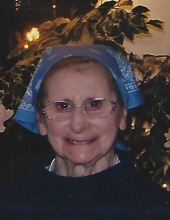 Theresa (Grisanti) Kruglik, 99, passed away peacefully on Wednesday, December 14, 2021 at St. Mary’s Hospital in Waterbury. She was the wife of the late Stephen S. Kruglik.

Mrs. Kruglik was born April 27, 1922 in Bronx, New York, daughter of the late Frank and Jennie (Pesce) Grisanti. She was retired from the Cheshire Department of Education, where she worked as a Teacher’s Assistant.

Mrs. Kruglik is survived by her sons, Robert Kruglik and his wife Lynda of Rocky Hill and Richard Kruglik and his wife Patricia of Cheshire; and her brother, Rocco Grisanti of Long Island, N.Y. She will also be missed by her six grandchildren, thirteen great-grandchildren, two great-great-grandchildren and many nieces and nephews. In addition to her parents, Mrs. Kruglik was predeceased by her daughter, Lorraine Thompson, and her sisters, Dot McHugh and Lee Eismont.

Arrangements – Visitation will be held at the Alderson-Ford Funeral Home of Cheshire, 615 South Main Street on Monday from 4:00 p.m. until 6:00 p.m. Funeral services in celebration of Theresa’s life will be held on Tuesday at 9:15 A.M. from the funeral home to St. Bridget of Sweden Parish/St. Bridget Church, 175 Main Street, Cheshire, for a Mass of Christian Burial at 10:00 A.M. Burial will follow in St. Mary’s Cemetery, Hamden. In lieu of flowers, memorial contributions, in Theresa’s memory, may be made to St. Jude’s Children’s Research Hospital 262 Danny Thomas Place Memphis, TN 38105.
To order memorial trees or send flowers to the family in memory of Theresa Kruglik, please visit our flower store.