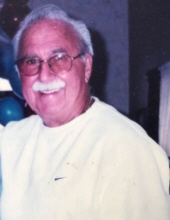 He was born April 2, 1929 in New York, NY son of the late George and Fontina (Drossos) Sarris.
Mr. Sarris was a veteran proudly serving in the United States Navy during the Korean War. He was the long time owner of Sarris Real Estate in Cheshire. In addition to be a well regarded boxer in his youth, he was also a standout baseball player who led his league in stolen bases four consecutive years. Ted was an avid fan of the Boston Red Sox and rarely missed watching a game.

Theodore is survived by his children Ted Sarris Jr., Susan and her husband Jerry Redente, Janet and her husband Bart Grasson, Pamela Sarris all of Cheshire and Greg Sarris of Bethany; a sister Eva Kitsos of North Haven; grandchildren Nick, Ali, Matt, Katie, Kathryn, Caroline, and Laura; and two great grandchildren Caden, and Jax. He was predeceased by his brother John Sarris.

Calling hours for Mr. Sarris will be held 5 to 7 P.M, Wednesday, May 22, 2019 at The Alderson-Ford Funeral Home of Cheshire, 615 South Main St, 06410. Theodore’s funeral will be held 10 A.M, Thursday, May 23, 2019 at the funeral home. Burial with full military honors will take place in Cheshire Hillside Cemetery. Donations in his name can be made to SOLDIERS AND SAILORS MEMORIAL AND COMMUNITY ENDOWMENT INCORPORATED, 8458 W MAIN ST, MARSHALL, VA 20115.
To order memorial trees or send flowers to the family in memory of Theodore G. Sarris Sr., please visit our flower store.