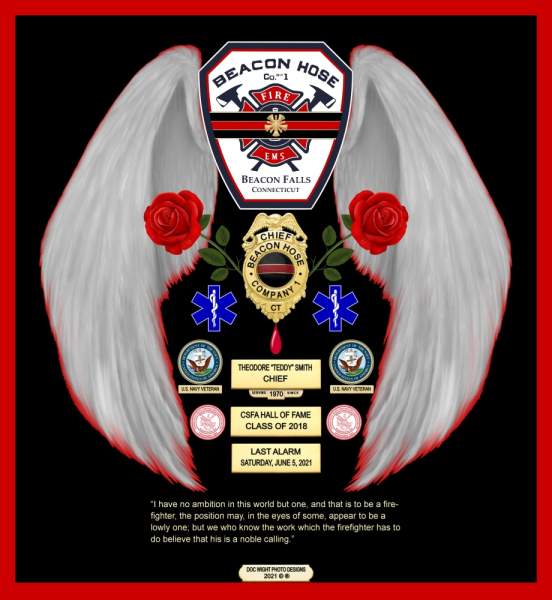 Beacon Falls - Theodore “Ted” Smith, 75, passed away on Saturday, June 5, 2021 at Griffin Hospital. He was the husband of Lillian (Alanskas) Smith.

Ted was born June 16, 1945, in Waterbury, the son of the late Arthur and Marjorie (Dowling) Smith. He was graduate of Naugatuck High School Class of 1964. He proudly served his country in the U.S. Navy. Ted worked as a sheet metal fabricator and Foreman for several companies to include, Synagro, in both CT and RI, Custom Metal Works and eventually retiring from Leo J. Hamel Co. after 35 years with the company. He was a member of the Sheet Metal Workers, Local 40.

He was raised in Beacon Falls and spent many years around fire service watching his father obtain the rank of Chief with Beacon Hose Company # 1. In 1970, Ted joined Beacon Hose shortly thereafter becoming one of their first EMTs. He quickly climbed the ranks, serving as Chief from 1997-2000, completing the first father-son combination in the history of BHC #1.

During his tenure as a Chief officer, Ted has been described as utilizing his old school skills and values with new techniques bring beacon hose into the 21st century.

Ted was a 25-plus year member of the Connecticut State Firefighters Assoc. and in 2018, Ted was inducted into their Hall of Fame. In addition to the Town of Beacon Falls, Ted served the Naugatuck Valley as Past President of the Valley Fire Chiefs Assoc. and was Chairman of the Valley Fire School Building School Committee. He was also a member of the New Haven County Fire Chiefs Assoc. and was an honorary member Hotchkiss Hose Company.

In addition to his wife, Lillian, Ted is survived by his loving sons, Darryl A. Smith of Milford and Chad A. Smith and his wife, Gina of Wallingford. He is also survived by his cherished nieces and nephews; his mother-in-law, June Hennessey of Sarasota, FL; and his adored grand puppies. He was predeceased by his sisters, Ellen Gatlin, and Beth Grossenbach; and his father-in-law, Joseph Hennessey.

Arrangements – A funeral service with Military and Fire Department honors will be held on Saturday June 12, 2021 at 10 am at Beacon Hose Company No. 1, 35 N. Main St., Beacon Falls. Committal will be held at the convenience of the family. The Alderson-Ford Funeral Home of Naugatuck is assisting with arrangements. Memorial contributions in Ted’s name may be made to Beacon Hose Co., # 1.
To order memorial trees or send flowers to the family in memory of Ted Smith, please visit our flower store.