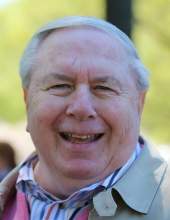 SOUTHBURY- Stanley Joel Halpert, 77, passed away Thursday, April 16, 2020 at St. Mary’s Hospital. He was the loving husband of Marilyn G. (Hillman) Halpert, whom he was married to for 55 years.

Mr. Halpert was born July 27,1942 in Bridgeport, son of the late Otto and Rose (Kohn) Halpert.

Stanley was fortunate to have owned several family businesses throughout his life. He worked beside his father at Budget Food Service in Waterbury for over twenty-five years and later took ownership of The Rug Barn in Bridgeport prior to his retirement. During his retirement, Mr. Halpert most enjoyed spending time with his family.

Besides his wife, Mr. Halpert is survived by his two daughters, Sue and her husband Jeff Gellerman of Charlotte, NC, and Lisa MacFadden of Newington; and his grandchildren Sydney and Lexi Gellerman, and Jordan MacFadden.

A devoted grandfather, Mr. Halpert's face lit up when he told others about his daughters and granddaughters accomplishments. Family always came first and no one was a prouder husband, father, or grandfather. In addition to being a devoted family man, Mr. Halpert was a beloved friend as well. His loyalty and empathy were just a few of the myriad qualities that made him a shining light in every life that he touched.

Mr. Halpert was actively engaged in the Jewish community. Whether it was weekly shabbat dinners with a cherished group of friends, holiday celebrations with extended family, or his tenure as president of the Western Connecticut Jewish Community Center, Mr. Halpert loved being involved.

A private graveside service will be held at Beth El Cemetery. The Alderson-Ford Funeral Home of Waterbury, 496 Chase Ave, 06704, is assisting the family with the arrangements. Donations in Mr. Halpert’s name can be made to a charity of the donor's choice.
To order memorial trees or send flowers to the family in memory of Stanley Joel Halpert, please visit our flower store.