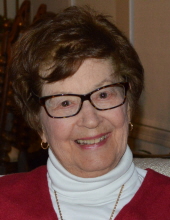 OXFORD- Shirley Janice Keane, 92, passed away peacefully on Wednesday, November 27, 2019 at the Glendale Center in Naugatuck. She was the widow of Edward James Keane.

Mrs. Keane was born January 10, 1927 in Stratford, CT. She was the daughter of the late Joseph Albert and Florence Caroline (Kennedy) Bulmer.

Shirley was an avid golfer, and former member of the Brooklawn Country Club in Fairfield. In addition to golf, she enjoyed tennis, bowling, watching the Uconn Women’s basketball team and traveling the world. One of her favorite places to travel was to the family camp in Maine.

Mrs. Keane is survived by her two daughters: Janice Krawiec of Valley Center, CA, and Cheryl Fenton of Naugatuck; four grandchildren: David Krawiec of Valley Center, CA; Laura Pagel (Derek) of Thorndale, PA; Karen Tabor (Robert) of Naugatuck; and Kimberly Parlatore (Michael) of Torrington; and five great grandchildren: Caitlyn, Dylan, Trenton, Scarlett, and Savannah. She was predeceased by her sister Florence Eberle. She also leaves behind a very special niece, Dianne Dixon of Norwood, PA who was very close to her.

Calling hours for Shirley will be held 5 to 7 P.M, Thursday, December 12th , 2019 at The Alderson-Ford Funeral Home of 201 Meadow St, Naugatuck, CT 06770. A service will be held at 7 P.M to conclude calling hours. In lieu of flowers, donations in Mrs. Keane’s name can be made to St. Michael’s Episcopal Church, 210 Church St, Naugatuck, CT 06770.
To order memorial trees or send flowers to the family in memory of Shirley Janice Keane, please visit our flower store.