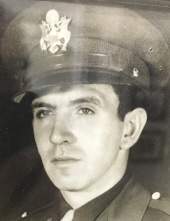 New Rochelle, NY- Samuel Levine, 103, of Waterbury, until 2006, passed away at United Hebrew of New Rochelle. He was the widower of Anna Levine who predeceased him in 1984, after 36 years of marriage.

He was born July 5, 1916 in Waterbury, son of Bertha and Nathan Levine.

He declined the Army's offer that he return to presumed safe duty in Panama, requesting instead to train for a combat infantry officer role in the European Theater. He was then sent for O.C.S. training, commissioned as a Lieutenant, and later promoted to Captain.

"Sam" was 28 years old when he arrived at the Allie's Normandy beach-heads. He proceeded to fight within General Patton's "Third Army" spearheads, breaking out of Normandy at the Cliff Gap, then pushing across Occupied France. In Dec.1944/ Jan.1945, Sam fought in the epic "Battle of the Bulge", in the Ardennes/ Bastogne region of Belgium.

Sam worked as an industrial inspector, including, for many years, at Pratt and Whitney Aircraft, in Southington.

He is survived by his son, Joel Levine, M.D., of Camas, WA, two grandchildren, Joshua and Aaron Friedman, and two great-grandchildren, Elliot and Samantha Friedman. Sadly in 2016 Samuel was predeceased by his only daughter Reeva Friedman; and siblings Ike Levine, Esther Oren and Rose Isaacs.

A graveside service with Military Honors will be held 11 A.M., Monday, August 26, 2019 at Hebrew Benefit Cemetery. Family and Friends are asked to meet directly at the graveside. Burial will follow the service. The Alderson-Ford Funeral Home of Waterbury, 496 Chase Ave, 06704, is assisting with arrangements.
To order memorial trees or send flowers to the family in memory of Samuel Levine, please visit our flower store.