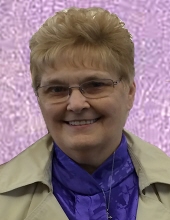 WALLINGFORD – Rosemary A. “Rosie” Hughes, a longtime Naugatuck resident, passed away on Wednesday November 6, 2019 at Masonicare of Wallingford.

Rosie was born February 4, 1945, in Presque Isle, Maine, the daughter of the late Arden and Mary (White) Jordan. She was a 1963 graduate of Naugatuck High School and had been employed by Country 92.5 radio for many years, where she was known as “Radio Rosie”.
Rosie is survived by her sons Gary and his wife Michelle of Naugatuck and Bert and his wife Heather of Middlebury; her niece Dawn Andersen-Seaman of West Simsbury; her grandchildren Kylie, Kaylynn, Zachary, Skyler and Cole as well as her great nieces /nephews Blair, Shelby, Michael and William. In addition to her parents, she is predeceased by her sister Dorothy Griffin as well as her beloved cat Sunny.

Arrangements – Calling hours will be held on Tuesday November 12, 2019 from 4 to 7 pm at the Alderson-Ford Funeral Home of Naugatuck, 201 Meadow St. with a service of remembrance at 7 pm. Before passing, Rosie’s request was “If you have anything purple, wear it”. Burial will be held at the convenience of the family. Memorial contributions may be made to St. Jude Children’s Hospital, 262 Danny Thomas Place, Memphis, TN 38105 or to the Alzheimer’s Association, 200 Executive Blvd., Southington, CT 06489.
To order memorial trees or send flowers to the family in memory of Rosemary A. "Rosie" Hughes, please visit our flower store.