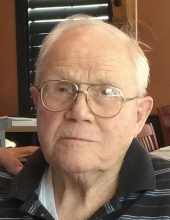 BANGOR, ME – Ronald Lisle Bickford, 94, also known as “Ron” and “Bennie,” formerly of Naugatuck and Meriden, Connecticut and Palm Coast Florida, passed away Wednesday September 4, 2019 at the Maine Veterans’ Home in Bangor. He was the husband of the late Joanne W. Bickford.
Mr. Bickford was born November 9, 1924 in Waterbury, the son of the late Edgar and Hazel (Lewis) Bickford. He was raised in Naugatuck and in 1943 joined the US Army where he received artillery training on Cape Cod and was held over in England pending the D Day invasion. He fought with the Fifth Armored Division landing in Normandy and eventually fighting in the Battle of the Bulge. When he returned from Europe, he found work at Connecticut Light and Power, now Eversource, eventually overseeing their power transmission projects throughout New England. He and his wife Joanne moved to Meriden, Connecticut and after he retired they spent years traveling the country in their RV. They settled in Palm Coast Florida for several years and eventually moved next to Joanne’s daughter Sue in Passadumkeag, Maine. After Joanne’s death, Ron moved to the Maine Veterans’ home where he lived for the past six years. Ron was a long-time member the Masons and the Elks beginning at Shepherd Salem Lodge No. 78 and the Naugatuck B.P.O.E. 967.
Mr. Bickford is survived by his son Scott R. Bickford of New Orleans, Louisiana and his daughter Tamara B. Nuenighoff and her husband Stephen of Mt. Pleasant, North Carolina from his first marriage, as well as his deceased wife’s children Susan Morin and her husband Victor of Passadumkeag, Maine, Linda Seibert and her husband Thomas of Jamestown, Colorado and Deborah Winchester of Ryegate, Vermont, as well 9 grandchildren and 9 great grandchildren. He was predeceased by his brother Lawson Bickford and his sister Lois V. Litke.
The family would like to thank the staff of the Maine Veterans’ Home in Bangor who provided Ron with exceptional care throughout his stay.
Arrangements – Funeral services will be held on Tuesday, September 10, 2019 at 11:00 am at the Alderson-Ford Funeral Home of Naugatuck, 201 Meadow St. Burial will follow in Grove Cemetery. There will be a short visitation beginning at 10:30 am on Tuesday at the funeral home preceding the service. Memorial contributions may be made to the Maine Veterans’ Home, Bangor at mainevets.charityproud.org or the Bangor Humane Society at bangorhumane.org/donate-ways-to-give.
To order memorial trees or send flowers to the family in memory of Ronald Lisle Bickford, please visit our flower store.