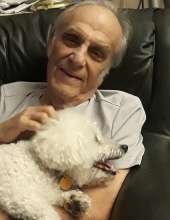 Roland was born August 24, 1934 in Bartenbach (now part of Göppingen), Germany, to the late Karl and Erna (Zeller) Ascher. As a young man, he spent a year traveling with a circus and also took an extended bicycle trip through parts of Europe. He then became an apprentice tool and die maker at Märklin. In 1960, thanks to his American friend Dave Winblad, Roland had the opportunity to spend a year in the United States. He liked it so much that he moved to the U.S. in 1961 with his then-wife. They ended up settling in Monroe, CT, and lived there from 1965 to 1986. For most of that time and beyond, Roland worked as a tool and die maker at DuPont in Newtown, CT, until taking early retirement and moving to Florida in the mid 1990's.

Roland was extremely talented in his trade. He was a perfectionist and proud of the quality work he produced. He was also very handy and could fix almost anything (as long as it wasn't electrical!). Outside of his job, Roland had many interests and hobbies, including motorcycle riding, building and flying radio control model airplanes, kite flying, target shooting, playing pool, bowling, stamp collecting, gardening, and designing and installing elaborate barriers to try to stop squirrels from getting into his bird feeders!

Roland was a unique person. He was quite a character, with a quick wit and a direct, unapologetic manner that sometimes got him into trouble! He had a gruff exterior, but underneath, he had a big heart. He had a habit of clogging up his daughter's answering machine by leaving long, rambling messages that were too funny to erase (and of course getting mad when he called and heard "memory full")! Above all, Roland had a lot of integrity - and he hated dishonesty, disloyalty, hypocrisy, and b.s. of any kind!!

In 2006 Roland adopted a Bichon Frise puppy and named him Cognac. For the last 13 years, they were inseparable. It's hard to imagine a dog being more loved or better taken care of!

Visitation will be held on Friday, September 27, from 5 to 8 p.m. at the Alderson-Ford Funeral Home, 201 Meadow Street, Naugatuck, CT. A service of remembrance will be held at 7 p.m., in which friends will be invited to share memories and stories of Roland. Burial will be held in Wooster Cemetery, Danbury, CT, at the convenience of the family. In lieu of flowers, memorial contributions may be made to Bichon Frise Rescue of Northern NJ, P.O. Box 136, East Hanover, NJ 07936 (www.bichonrescuenj.com).
To order memorial trees or send flowers to the family in memory of Roland T. Ascher, please visit our flower store.