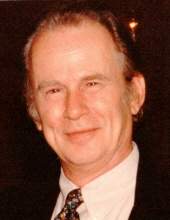 After his military service, he earned his B.S., ‘64 and B.A., ‘67 degrees from Quinnipiac (College) University. It was at Quinnipiac that he met and later married Leslie on February 12, 1971. After graduation he taught English at Saint Bernard High School, New London, CT, and then spent the rest of his working career with the Bureau of Alcohol, Tobacco and Firearms both in the Washington D.C. and Hartford area offices.

Bob loved music, playing both the piano and pipe organ and served as organist for Pilgrim Congregational Church in New Haven for 40 years. He also loved working in the yard, planting gardens, mowing the lawn and in his younger days, helping his neighbor create a waterfall and koi pond in their backyard.

Funeral services and burial will be private and there will be no calling hours. The Alderson-Ford Funeral Home of Cheshire is assisting with arrangements. Memorial gifts can be made to a charity of your choice.
To order memorial trees or send flowers to the family in memory of Robert W. West, please visit our flower store.