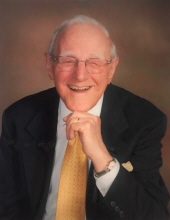 Robert W. Ferrandiz II, age 91, of Cheshire, CT quietly slipped into the arms of Jesus his Lord
and Savior on Thursday, June 27, 2019 after a long illness with his loving wife and daughter by
his side. He was born on August 17, 1927 in Brooklyn, NY, son of the late Francis B. and Harriet
(Wells) Ferrandiz. He resided in Brooklyn until moving to Hillsdale NJ in 1965.

He was the faithful husband of Judith L. (Anderson) Ferrandiz, with whom he just celebrated
their 58 th wedding anniversary on June 10 th . He is also survived by his beloved daughter, Louise
H. Miller and her husband Rusty of Westwood, NJ; his cherished grandchildren, Alan Robert
Miller and Martyne Louise Miller and a large and loving extended family. He was preceded in
death by his sister, Ruth Vislosky.

Mr. Ferrandiz graduated from Manual Training High School, Brooklyn, NY; Brooklyn College with
a BA and received his Masters Degree (1955) from NYU. While attending Brooklyn College he
established the first chapter of Inter-Varsity Christian Fellowship at the school. He served his
Country with honor and pride as a Sergeant in the US Army Air Force during WWII. He was
employed by Prentice-Hall, Inc. in NYC and NJ for 35 years until his retirement in 1989. He was a
member of the Dean Street Baptist Church (First Swedish) Brooklyn, NY and the Community
Evangelical Free Church in Rivervale, NJ and faithfully served on their governing boards and was
a beloved Sunday School teacher.

His life was one of service to others. He served as both usher and counselor at the NYC Billy
Graham Crusade in 1957. After retirement, he served at every election on the Bergen County,
NJ Board of Elections from 1994-2006.

In 2006 he and his wife Judith retired to Elim Park Place in Cheshire CT, where he had served
on the Board of Directors from 1971-1998. He assisted in the chapel, served on the Missions
Committee, Welcome Committee, led Home Bible Studies and also served on the Resident
Council 2012-2013. While living at Elim Park, Mr. Ferrandiz compiled and edited the book “Elim
Park, Pictures of Faith, Stories of People”.

A Memorial Service will be held on July 27, 2019 at 1:00 PM in Nelson Hall at Elim Park. In lieu
of flowers memorial contributions may be made to the Elim Park Baptist Home, Inc. 140 Cook
Hill Road, Cheshire, CT. 06410 for either the Resident Benevolent Fund or the Mary Melby
Fund.

The Alderson-Ford Funeral Home of Cheshire has been entrusted with his care. To leave
condolences for Robert’s family, please visit www.fordfh.com
To order memorial trees or send flowers to the family in memory of Robert W. Ferrandiz II, please visit our flower store.