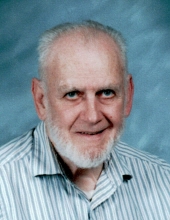 WALLINGFORD – Robert G. Ricker, 85, passed away Friday, September 13, 2019 at Midstate Medical Center in Meriden. He was the husband of the late Barbara (Wickman) Ricker.

Mr. Ricker was born January 31, 1934 in Cambridge, MA, son of the late Irwin and Ruby (Walters) Ricker. He graduated in 1951 from Hamden High School. As a gifted artist, he went on to attend Rhode Island School of Design where he proudly earned a Bachelor of Architecture in 1956. He later retired from Fletcher-Thompson Inc., where he worked as a registered architect. Mr. Ricker served in the Connecticut National Guard from 1957 until 1963. He was a former deacon at The First Congregational Church of Cheshire and served as President of the Cheshire High School Band Parents Association.

Mr. Ricker is survived by his son; Gary Ricker, and his wife Beth, of Southington, his daughters; Sharon Keiser, and her husband, Martin, of Fairfield, and Holly Ramos, and her husband, Luis, of Meriden, and his brother; Bruce Ricker and his wife Carol of Higganum. He leaves behind 6 grandchildren and their spouses, Sarah and Jeff Webster, Martin and Katie Keiser, Amy Keiser, Kimberly Ricker, Melissa Ramos, and Nicole Ricker; and three great grandchildren, Lilly Keiser, Ava Keiser, and Nolan Webster. Mr. Ricker loved his family dearly and always served as the guest of honor at the annual RickerRama Christmas party.

Arrangements – Visitation will be held on Monday, September 16, 2019 from 5:00 pm to 7:00 pm at the Alderson-Ford Funeral Home of Cheshire, 615 South Main St. with a Service of Remembrance at 7:00 pm. Burial will be held at the convenience of the family. The family would like to extend their sincere gratitude to the staff at Masonicare Health Center for the wonderful care and compassion provided to Robert. He fondly called Masonicare his home for many years. In lieu of flowers, memorial contributions, in Robert’s name, may be made to The Masonic Charity Foundation of Connecticut, P.O. Box 70, Wallingford, CT 06492.
To order memorial trees or send flowers to the family in memory of Robert G. Ricker, please visit our flower store.