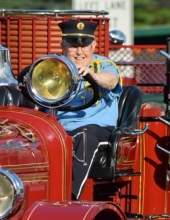 Bob was born January 2, 1930, in Waterbury, the son of the late Charles and Alice (Benson) Messner. He was Master Mechanic for the State of Connecticut retiring in 1980. He enjoyed wood working and anything that required working with his hands. He was known for having the ability to fix almost anything.

Bob was a proud member of Beacon Hose Company No. 1. To date, he was the longest-serving member in the history of the department, serving the residents of Beacon Falls for nearly 63 years. He joined the department in 1958 and served in various capacities. In 2019, Bob was named Fire Police Captain Emeritus. He was also awarded the Golden Shamrock and Bologna Sandwich awards from the department.

Bob was a member of the Shepard Salem Lodge No. 78 where he and his wife enjoyed many outings with the Masonic order.

Arrangements – Funeral services for Bob will be held on Saturday, March 6, 2021, at 3:00 PM at the Alderson-Ford Funeral Home of Naugatuck. Burial will be held in the spring in Grove Cemetery. Calling hours will be held on Saturday from 1 pm until the start of the service at 3 at the funeral home. Memorial contributions may be made to Beacon Hose Company No. 1, 35 North Main St., Beacon Falls, CT 06403.
To order memorial trees or send flowers to the family in memory of Robert "Bob" Messner, please visit our flower store.