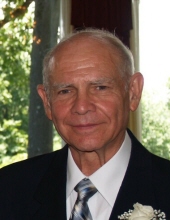 Richard L. Viscio, Sr. age 88 of Cheshire, CT entered into eternal rest on Thursday, December 16, 2021, with his beloved wife of 64 years Ann Rosemarie (Rusate) Viscio, and family by his side. Richard was born in New Haven on June 4, 1933, to the late Pasquale and Sadie (Fertitta) Viscio. Richard was predeceased by his beloved son Richard L. Viscio Jr. and sister Carmella Rusate.

He was a long-time resident of New Haven before moving to Cheshire 20 years ago. He enjoyed a successful career at SNET/AT&T which spanned several decades. Richard was a talented and avid gardener and freely shared this talent and knowledge with so many others. He also spent many happy hours “tinkering”, building and creating in his workshop. He could always be counted on to fix anything that needed fixing or build anything that needed building! A loving husband, father, uncle, brother, grandfather, great-grandfather, and friend, he always offered support, gentle guidance and was quick to lend a helping hand.

Besides his devoted wife, Mr. Viscio is survived by his daughters Cynthia (John) Ryan and Janice (James) Ingarra; his daughter-in-law Tina Viscio; his sister Patricia Kapsinow; his brother Donald (Carmel) Viscio his grandchildren Rachel (Chris) Viscio-Russo, Erica Viscio, Gabrielle and Austin Ingarra; as well as his great-grandson Blake Viscio. Richard is also survived and was predeceased by several devoted nieces and nephews.

Arrangements – Visitation for Mr. Viscio will be held on Sunday, December 19, 2021, from 4 to 7 pm at the Alderson-Ford Funeral Home of Cheshire, 615 S. Main St. His funeral procession will leave the funeral home on Monday morning at 9:30 am and proceed to St. Bridget of Sweden Parish-St. Bridget Church for a Mass of Christian Burial at 10 am. Committal will follow at St. Lawrence Cemetery, West Haven. Memorial contributions may be made to St. Bridget School, 175 Main St., Cheshire, CT 06410.
To order memorial trees or send flowers to the family in memory of Richard L. Viscio Sr., please visit our flower store.