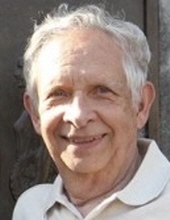 Richard J. Frantz Sr., 84, passed away peacefully Thursday March 7, 2019 at Mid-State Medical Center in Meriden. He is the husband of Nancy (Beattie) Frantz.
Mr. Frantz was born July 18, 1934, in Scranton, PA the son of George and Ruth (Werner) Frantz. He was a proud Army Veteran. After his years of service, he graduated from the University of New Haven and the University of Connecticut. He moved to Cheshire in the early 1960s and worked for various companies as an Electrical Engineer.
Mr. Frantz was an active member of the Church of Jesus Christ of Latter-day Saints in Waterbury. He avidly tended his organic garden. He enjoyed singing in Cheshire Community Choir and then the Bristol Chorale and was a member and club officer of Cheshire Toastmasters.
Besides his wife of 56 years, Mr. Frantz is survived by his sons Richard Frantz Jr. of Cheshire and David Frantz and his wife Eunmi and their children Nathan and Nigel of Harvest, AL; his daughter Mary Brown and her husband Chris of Los Angeles, CA; and his brother Robert Frantz of Scranton PA. Besides his parents he is predeceased by sons George and Paul and his brother George.
Arrangements – Funeral services will be held on Tuesday March 19, 2019 at 10 am at Church of Jesus Christ of Latter-day Saints in Waterbury, 100 Williamson Dr. Burial will be held at the convenience of the family and there are no calling hours. The Alderson-Ford Funeral Home of Cheshire is assisting with arrangements.
To order memorial trees or send flowers to the family in memory of Richard J. Frantz Sr., please visit our flower store.