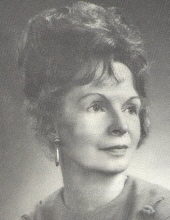 WALLINGFORD – Rebecca “Becky” Schoeck, 99, passed away Friday August 2, 2019 at Masonicare in Wallingford. She was the wife of the late Howard W. Schoeck.

Mrs. Schoeck was born July 20, 1920 in Bridgeport, the daughter of the late Norman and Agnes (Thomas) Hovey. She was a longtime employee of the Naugatuck Board of Education, serving as Secretary to the Superintendent of Schools for over 30 years. She was extremely active with the Order of the Eastern Star serving as past Worthy matron of the Naomi Chapter #23; Worthy Grand Matron of the Eastern Star of CT and later in her Eastern Star Activities she served as Past Grand Secretary. She was formerly active with the Rainbow for Girls, serving as Mother Advisor in Waterbury as well as the state level.

Mrs. Schoeck is survived by her son William H. Schoeck of MA; her daughter Susan Mattson of FL as well as her grandchildren Julie, Thomas, Jennifer and Elizabeth.

Arrangements - A Memorial service will be held on Saturday August 17, 2019 at 2 pm in the Chapel of Masonicare of Wallingford, 22 Masonic Ave. Burial will be held at the convenience of the family and there are no calling hours. Memorial contributions may be made to Eastern Star of CT (Checks Payable to The Grand Chapter of CT OES), P.O. Box 143, Plymouth, CT 06782. The Alderson-Ford Funeral Home of Naugatuck is assisting with arrangements.
To order memorial trees or send flowers to the family in memory of Rebecca "Becky" Schoeck, please visit our flower store.