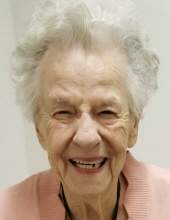 CHESHIRE- Rebecca R. Parsons, 94, passed away Wednesday, November 4, 2020 at Litchfield Woods in Torrington. She was the widow of Alton Ginn and John Parsons.
Mrs. Parsons was born April 20, 1926 in Washburn, ME daughter of the late Frank and Bessie (Boone) Gregg.

Mrs. Parsons married Alton Ginn and moved to Naugatuck. She always worked at various jobs with increasing responsibility, from the A&P, to Manager at Girtx Thrift Store, Uniroyal, then Sales Manager at W.O.W.W Radio Station. She partnered with John Parsons who she later married at Parsons Real Estate and was Sales Executive at Price & Lee Publishing Company. Later she volunteered at the Salvation Army.

Becky was a blue bird authority working with the Audubon Society. She built and maintained 25 blue bird houses in Southbury and was instrumental in increasing the bluebird population in Connecticut. There is a documentary on Becky for her work with blue birds that was shown on PBS tv. She helped White Memorial in Litchfield to eradicate geese at the park by replacing their eggs with chicken eggs.

A graveside service for Becky will be held 11 A.M, Tuesday, November 10, 2020 at Grove Cemetery, Cross St., Naugatuck, 06770. Family and friends are asked to meet directly at the cemetery. Burial will follow after the service and there are no calling hours. The Alderson-Ford Funeral Home of Naugatuck, 201 Meadow St, 06770, is assisting the family with the arrangements. In lieu of flowers donations in Mrs. Parsons name can be made to the White Memorial Conservation Center, Inc., 80 Whitehall Rd., P.O Box 368, Litchfield, CT 06759.
To order memorial trees or send flowers to the family in memory of Rebecca "Becky" R. Parsons, please visit our flower store.