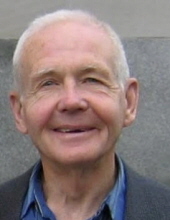 CHESHIRE – Raymond E. Podhorn, 88, passed away on Tuesday, July 9, 2019 at The Village at Kensington Place in Meriden. He was the husband of the late Norma (Duffany) Podhorn. Mr. Podhorn was born July 21, 1930 in Alton, IL, son of late Andrew and Margaret (Purvis) Podhorn.

He was a retired systems analyst for The Federal Reserve Bank of New York. He was a member of the Knights of Columbus and was a communicant and religious education teacher of St. Thomas Becket and St. Bridget Churches. Raymond and his wife Norma moved to Cheshire from New Jersey in 2001, to be near family. He was a life-long runner and could often be seen running around the track at Cheshire High School, prompting the track coaches to ask “who is that guy?”

Mr. Podhorn served in the Army on active duty from September, 1951 until May, 1954 and remained in the USAR until December, 1961 at which time, he was honorably discharged. He achieved the rank of Second Lt. and was a platoon leader in the 19th Regiment’s Tank Co. Mr. Podhorn was stationed overseas in Korea from July, 1953 until April, 1954.

Arrangements – A Mass of Christian Burial will be held on Saturday October 12, 2019 at 10AM in St. Bridget of Sweden Parish-St. Thomas Becket Church, 435 North Brooksvale Road, Cheshire. Family and friends are asked to meet directly at the church. Burial will follow in St. Bridget Cemetery, with a luncheon to be held in the Father Frisbie Hall at St. Thomas Becket immediately following the burial. There are no calling hours and the Alderson-Ford Funeral Home of Cheshire is assisting with arrangements. Memorial contributions in Raymond’s name, may be made to The Juvenile Diabetes Foundation and Asperger/Autism Network (ANNE). For online condolences, to share a photo or a story, please visit www.fordfh.com .
To order memorial trees or send flowers to the family in memory of Raymond Edward Podhorn, please visit our flower store.