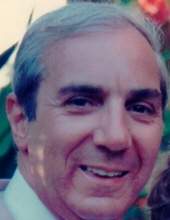 Odds are if you are reading this at home, Ray D’Antonio may have played a role in fulfilling your dream of owning a place for your family to call your own. With his passing on April 12, Ray culminated a remarkable life as a wonderfully successful corporate businessman, loving son, accomplished coach, fantastic husband, and father, and later, a warm, friendly, and highly respected real estate agent who always put others first. With his loving wife Judy of 62 years, they were gracious hosts, generous to many charities, devoted to St Bridget’s church and their wonderful, dear friends at Copper Hill.

Born in New Haven on January 18, 1935, to Albert and Marie D'Antonio of West Haven, Ray was the youngest of four boys. A lifelong devoted fan of the Yankees, football Giants, New Haven Blades, and Yale hockey, he played baseball and hockey at the Loomis School, graduating in 1953. He helped create the first men’s hockey program at Wesleyan University graduating in 1957. But Ray’s checks were not limited to hockey. He also checked all of life’s boxes as a person.

His successful 35+ year career at Southern New England Telephone company as CT district manager was only a prelude to his true calling as a licensed real estate broker, creating “Pilgrim Realty” of Wallingford and later Cheshire where he continued to practice well into his 80’s. A ready smile, a firm handshake, and his reassuring and confident tone complimented what it meant to be professional and personable.

At the urging of his best friend Irving Smith of Carlsbad, CA, Ray went on a blind date and met Judy Burns of Englewood, NJ, whom he later married on April 12, 1958. The family grew with son Mark, born in 1960, and daughter Suzan born in 1961. His amazing interpersonal skills, devotion to Loomis, and business acumen helped lead the school to transform the hockey program from an antiquated, outdoor facility to the state-of-the-art rink they currently call home. At the 100-year anniversary celebration of their hockey program in 2017, Ray was a featured speaker as the oldest living Loomis hockey player.

For 87 years, Ray followed the simple motto “When one door closes, buy another one and open it yourself.” He opened many doors so others could pass through this life, punctuated by friendship, honesty, confidence, and most of all, happiness. His class and selfless demeanor, taught by his parents, always held that door open for others every time, without fail. It’s our hope when he arrived to be with family after his work here was complete, many stood at the ready, holding that door wide open for him.

Arrangements – Visitation for Ray will be held on Friday, April 29, 2022, at the Alderson-Ford Funeral Home of Cheshire, 615 S. Main St. from 10 am until his funeral procession leaves for church at 11 am. A Mass of Christian Burial will be held at 11:30 am at St. Bridget of Sweden Parish - St. Bridget Church, 175 Main St. with committal following in St. Bridget Cemetery.
To order memorial trees or send flowers to the family in memory of Raymond D'Antonio, please visit our flower store.