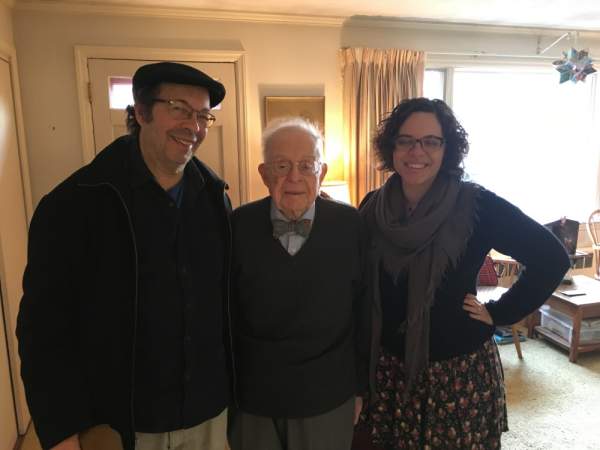 Ralph T. Rowland, a Cheshire resident and active member of the community for six decades, died on March 8, 2021 peacefully at his home. He was 100 years old.

Mr. Rowland, who was born in Elizabeth, New Jersey during the Woodrow Wilson administration, grew up there and in New Rochelle, where he graduated high school in 1937. Trained in the construction trades by his father, a builder, he studied engineering at Manhattan College and later, architecture at Columbia University. He worked in naval design before and after the U.S. entered World War 2 in 1941; as a draftsmen at Henry B. Nevins Shipyard he was part of the design team for the first fleet of YMS minesweepers, or ‘Y Boats’.

Enlisting in 1942, he joined the Navy’s 78th Construction Battalion, or ‘Seabees’, building airfields and advanced base facilities in the South Pacific; he later helped create a video documentary of his battalion’s experience there. He was awarded three battle stars and rose to the rank of Chief Petty Officer before his honorable discharge in 1945 at war’s end.

Returning to the states, he was hired at an architectural firm in New York, where he met Bernice Cannizzo, who was working as a secretary there. A propitious first date attending the musical “Carousel” led to an engagement and then marriage in 1946. The first of their four children was born a year later. The family settled in Cheshire in 1955.

Mr. Rowland’s career as an architect spanned five decades, notably at Fletcher-Thompson Inc., where he oversaw a variety of large scale projects, such as St. Vincent’s Medical Center in Bridgeport and several campus buildings at Fairfield University, and where he became a vice president of the firm. As a member of the American Institute of Architects, he specialized in building and fire safety codes, chairing committees to help improve code safety, and delivering expert writings, lectures and testimonies, including before the U.S Congress. He was inducted as a Fellow in the AIA in 1980.

Mr. Rowland’s civic activities were wide ranging. He was treasurer of the Democratic Party in Cheshire in the 1960s and elected to several terms on the town’s Planning Commission, also as its chairman. He served as Director of the Chambers of Commerce for both Cheshire and Hamden, and was a member of other planning agencies and commissions too plentiful to list.

A devout Catholic, he was on the finance council for St. Bridget of Sweden Church, and a generous benefactor for scores of charities, Catholic and otherwise.

In recent years, as a surviving member of the ‘greatest generation’, Mr. Rowland’s wartime service received renewed attention. As an avid member of VFW Post 10052 and the Army Air Force Roundtable, he was often called on to share his remarkably lucid memories of that time with journalists and students. In October 2020, he was one of three Cheshire citizens to be feted for their service on their 100th birthdays, including a parade through town, which Mr. Rowland enjoyed with a mix of gratitude and wonder.

Mr. Rowland is survived by his four children, Glenn, Mark, Roy and Lisa, and eight grandchildren. Bernice, his beloved wife of 68 years, died in 2014.


Friends may greet Ralph’s family at the Alderson-Ford Funeral Home of Cheshire, 615 So. Main St., Cheshire, CT 06410 on Thursday, March 11, 2021 from 4PM until 7PM. A Mass of Christian Burial will be celebrated on Friday, March 12, 2021 at 11:30AM at St. Bridget of Sweden Parish/St. Bridget Church, 175 Main Street, Cheshire. Friends are asked to meet directly at church. Burial with Full Military Honors will follow at St. Bridget Cemetery, Higgins Road, Cheshire. In lieu of flowers, donations to the Cheshire Food Pantry, and the Paralyzed Veterans of America, would be welcomed. To leave online condolences for his family, or to share a story of Ralph, please visit www.fordfh.com

Complementing his resolute work habits, Mr. Rowland was cherished by friends and family for his kindnesses, his compassion, and his abiding sense of humor, reflected in his droll tellings of shaggy dog stories, his annual gifting of self-illustrated Groundhog Day cards, and his thoughtful delivery of birthday wishes in the form of ‘Western Union singing telegrams’, which were sung over the phone by Mr. Rowland in a steady yet melodious baritone. He often enjoyed an evening libation of Irish Whisky while engaged in light hearted conversation. At such times, he was known to put a spin on an ancestral trope, remarking sardonically that work ‘was the curse of the drinking class.’
--
To order memorial trees or send flowers to the family in memory of Ralph T. Rowland, please visit our flower store.