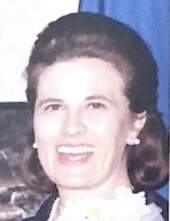 A devoted wife, mother, and grandmother, Phyllis possessed a kindness, grace, and elegance that was remarked upon by all who encountered her.

Born in San Antonio, Texas on April 10th, 1931 to Kenneth Phillip Roberts, an engineer for Caltex, and Ruby Lorraine Roberts (née Stewart), a housewife and businesswoman, Phyllis was shaped by a youth spent in the multicultural crossroads of the Texas and Mexico border town of Laredo where her family moved when she was a teenager.

Fluent in Spanish, Phyllis graduated from Laredo High School in 1948, a cheerleader and selected as Belle of the Rio Grande Parade during her time there. Shortly after, her parents were transferred by Caltex to Europe. Phyllis remained in Texas and enrolled as a student at Abilene Christian College, transferring to Trinity College in San Antonio, Texas the following year before she chose, in 1951, to join her family in Rotterdam, Holland.

Prior to moving to Europe, Phyllis served briefly as an employee of USAA in San Antonio and, in 1950, had met Robert “Bob” Pursley while he was in flight training in Waco, Texas, a second lieutenant at the time. In Europe, Phyllis discovered, among other pursuits, an exceptional talent for golf and became an avid golfer. Living primarily with her family first in Rotterdam and then London, she immersed herself in the arts and antique collecting.

In 1951, Bob had the extreme good fortune to reconnect with Phyllis by telephone, commencing an ongoing written correspondence through which Phyllis and Bob developed a deep respect and mutual admiration for one another and fell in love.

In 1952 Phyllis and Bob became engaged to be married while Bob was stationed at Air Base K-8 Kunsan during the Korean War. They were reunited in New York City in February of 1953 and married on May 9th, 1953 in San Antonio, Texas.

The couple had five children and Phyllis seamlessly balanced the role of mother and military wife as Bob’s career took them to Harvard Business School in Cambridge, MA (1955-57), the United States Air Force Academy in Colorado Springs, CO (1957-63), the Pentagon (1963-66), the Air War College in Montgomery, AL (1966), and back to the Pentagon (1967) where Bob served as military assistant to three successive Secretaries of Defense. In 1972 Bob, a three-star lieutenant general, was assigned as vice commander and then commander of the United States Forces Japan and Fifth Air Force, headquartered at Fuchu Air Station, Japan bringing the Pursley family to live there.

As a commanding officer’s wife, Phyllis interacted with individuals at the highest level of government and, with her innate poise, aplomb, and ability to act as a true partner in a military life, accompanied Bob as needed and stood in when necessary. Phyllis possessed an undeniably engaging presence and a natural ability to connect with people of myriad backgrounds, a notable trait throughout her lifetime.

During her time in Washington, DC, Phyllis embarked on studies of Catholicism at Georgetown University, prompting her conversion to Catholicism and the significant cultivation of a deep and abiding faith that informed how she lived the ensuing years. She lived her faith through an unfailing devotion to her family and in exhibiting sincerity, generosity, and compassion toward all who crossed her path. She continued spiritual studies and inquiry throughout the remainder of her life.

Upon Bob’s retirement from the military in 1974 and subsequent career in the private sector, Phyllis and family moved from Japan to Cheshire, Connecticut, eventually settling in Stamford, Connecticut for the next forty plus years.

An effortlessly chic beauty, Phyllis possessed a keen intelligence and was both a prolific reader and adept conversationalist. An accomplished pianist, talented dancer, and trained in the art of French cooking, Phyllis deeply appreciated the arts and learning. More than anything, Phyllis, a true matriarch, delighted in her family whom she tirelessly loved, guided, and supported.

Phyllis is survived by her husband Lieutenant General Robert E. Pursley, her children Mark Pursley (Ann) of Sharpsburg, GA, Elizabeth Rock of Cheshire, CT, Kristin Bowman (Paul) of Cheshire, CT, and Carol McGuire (Don) of Greenwich, CT, her brother Todd Roberts (Rodnee) of Scottsdale, AZ, her 18 grandchildren, and 27 great-grandchildren with another on the way. She was predeceased by her daughter Anne Pitts of Tallahassee, Florida.

Services will be held on Friday, October 1st at 10:00 am at St. Michael the Archangel Church in Greenwich, CT. A burial will be held at the United States Military Academy in West Point, New York at 10:00 am on Monday, October 4th. In lieu of flowers, the family requests donations be made in Phyllis’ honor to a charity of choice or to anyone in need, as Phyllis would have done. The Alderson-Ford Funeral Home of Cheshire is assisting with arrangements. For online condolences, to share a photo or a story, please visit www.fordfh.com.
To order memorial trees or send flowers to the family in memory of Phyllis Roberts Pursley, please visit our flower store.