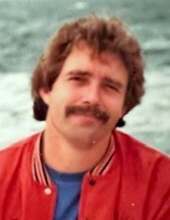 He was a graduate of Newtown High School where he excelled in football and track and field. He also played college football at American International College in Springfield, MA., his father’s alma mater. After leaving Newtown, Pete lived in California, Florida and ultimately ended up in Massachusetts where he lived in the town of Manomet for many years and then in Truro. Pete spent roughly 20 years working in the automobile business and spent the last 15 years of his career as an exterminator covering Cape Cod. Pete loved the ocean and was happiest when he was fishing in Cape Cod Bay or just sitting on the bluff at the family home in Manomet. He was an avid Atlanta sports fan from his early childhood living in Georgia and was in his glory watching his Braves win the World Series last year. While he had a passion for sports, Pete always had an amazing love for animals. Whether it was the family dog or the squirrels that would find their way onto his porch to eat the peanuts that he would place by his chair, he had an undeniable connection with them.

Arrangements: A memorial service for Mr. Manning will be held Thursday, March 10, 2022, at 11:00 A.M., at The Alderson-Ford Funeral Home of Cheshire, CT, 615 South Main Street. A private burial service will take place at a later date in Manomet, MA. Friends may call at the funeral home Thursday morning, from 10:00 a.m. the start of the service. Memorial contributions, in his name, may be made to the Massachusetts Humane Society, P.O. Box 850177, Braintree MA 02185,. For online condolences, to share a photo or a story, please visit www.fordfh.com.

To order memorial trees or send flowers to the family in memory of Peter S. Manning, please visit our flower store.