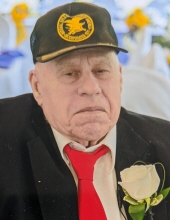 Mr. Zentek was born March 20, 1931, in Cheshire, the son of the late Paul and Aniela (Jablonski) Zentek. He was a longtime Cheshire resident and had worked for Agway.

Mr. Zentek is survived by his daughter Mari Lea Dziurgot and her husband Stanley of Wallingford; his sons Martin and his wife Wendy of Southington and James of Cheshire; his grandchildren Matthew, Christopher and William Dziurgot and Shayne Mackiewicz; his siblings Helen Petrowski of Santa Ana, CA, Mary Galko of Prospect and Louise Curry of Wallingford; his special niece Pauline Masse as well as many nieces and nephews. In addition to his parents and his wife, Mr. Zentek is predeceased by his grandson Saxxon and his brothers Stanley, Michael, Joseph and Frank Zentek; and his sisters Anna Cardo and Stella Behrmann.

Arrangements – A private graveside service will be held in Cheshire Hillside Cemetery. Public visitation and services will be announced at a later date. Memorial contributions may be made to HIS Mansion, 395 Wolf Hill Rd., Deering, NH, 03244. The Alderson-Ford Funeral Home of Cheshire is assisting with arrangements.
To order memorial trees or send flowers to the family in memory of Paul Zentek, please visit our flower store.