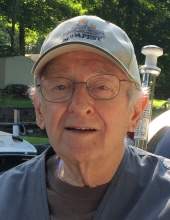 Paul M. Kotuby, Sr., age 92, formerly of Naugatuck, entered into rest on Saturday, September 18, 2021 at the River Glen Health Care Center in Southbury. He was the devoted husband of Ruth (Gazdik) Kotuby for over 68 years. Paul was born on May 13, 1929 in Proctor, VT, son of the late Paul and Mary (Svida) Kotuby.

Paul was born and raised in Vermont before serving his country with honor and pride with the USAF, ranking as Staff sergeant during the Korean War. Paul earned his Bachelor’s degree in engineering at UCONN and soon after he and Ruth married and started their family together in Naugatuck. He appreciated music, especially from the “big band era”, and cheered for the Boston Red Sox and UCONN’s Women’s basketball. Paul enjoyed fishing and was delighted when family members joined him on his beloved Lake Bomoseen, Vermont. He will be remembered not only as a “gentleman”, but as a “gentle man”. His faith and the love of family meant everything to him.

Services for Paul will be held at the convenience of his family. Memorial contributions may be made to the American Heart Association, at www.heart.org The Alderson-Ford Funeral Home of Naugatuck has been entrusted with his care. To leave online condolences for his family, please visit www.fordfh.com
To order memorial trees or send flowers to the family in memory of Paul M. Kotuby, Sr., please visit our flower store.