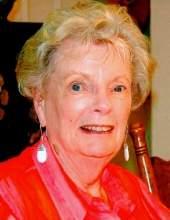 CHESHIRE - Patricia Margaret (Melville) McGovern, 89, passed away peacefully on Friday, December 3, 2021, at the Autumn Lake Healthcare at New Britain. She was the wife of Charles (Jim) McGovern who predeceased her in October 2016.

Mrs. McGovern was born August 1, 1932, in the Astoria neighborhood of Queens, in New York City. She was the oldest child of the late Jerome and Catherine (Egan) Melville.

After high school she trained as a professional dancer. She met her husband Jim on a blind date. After being wed, she embarked on a life as the wife of a career Marine, eventually raising five children while moving to numerous duty stations. Upon her husband’s retirement from the Marine Corps, they settled in Cheshire where they lived for 48 years. All five children graduated from Cheshire High School and she meticulously maintained and decorated their home on Woodland Drive, which continued to serve as the family gathering place for holidays and special occasions long after the children became adults. She was a faithful communicant at Saint Bridget’s Church.

She is also survived by her younger sister Regina Burns and her husband Robert of Saint Charles Missouri, along with four nieces and their children.

Arrangements – Funeral services for Mrs. McGovern will be held on Thursday, December 9, 2021, with the funeral procession leaving the Alderson-Ford Funeral Home of Cheshire, 615 South Main Street at 9:15 A.M. and proceeding to St. Bridget of Sweden Parish / St. Bridget Church, 175 Main Street, Cheshire for a Mass of Christian burial at 10:00 A.M. Burial will follow at the State Veterans Cemetery, 317 Bow Lane, Middletown.
To order memorial trees or send flowers to the family in memory of Patricia M. McGovern, please visit our flower store.