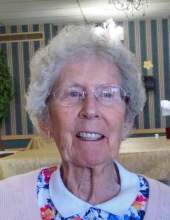 WATERBURY; Mrs. Olive (Sibold) Crepon, 98, of Waterbury, passed away Wednesday May 18, 2022 at Abbott Terrace Health Center. She was the wife of the late Norman R. Crepon, Sr.

Olive was born February 12, 1924 in Waterbury, a daughter of the late Otto and Sophie (Lowenthal) Sibold and was a lifelong Waterbury resident. She attended Barnard Elementary School and was a 1942 graduate of Crosby High School. Olive also attended Columbia University School of Nursing graduating in 1955. After graduating from high school, Olive worked for the Bristol Company in Waterbury, and prior to nursing school she worked for several doctors' offices at Yale-New Haven Hospital as well as several professors at Yale University. She also worked for the dental practice of her son Norman R. Crepon, Jr. DMD for several years.

At the age of 23, she set out on a three-week cross-country train trip, traveling alone, returning with a lifetime of memories. Olive served as an American Red Cross volunteer. She was a member of the Third Congregational Church in Waterbury, the Mattatuck Unitarian Universalist Society, the Humanist Association of Connecticut, Waterbury Women’s Club and the Connecticut Citizen Action Group. She enjoyed performing locally and out of state when singing with the Sweet Adelines.

She leaves her son, Norman R. Crepon, Jr. DMD of Waterbury and her daughter, Andrea Lynn Armbruster and her husband Herman of Terryville, her grandsons, Christopher, Stephen, Gregory, Matthew and Michael as well as three nieces and nephews. She was predeceased by her brother, Robert Sibold.

The family extends its sincere thanks and appreciation to the staff of Abbott Terrace Health Center for the care provided.

A graveside service in celebration of Olive’s life will be held privately in New Pine Grove Cemetery in Waterbury. In lieu of flowers, memorial contributions may be made to the American Red Cross 209 Farmington Ave. Farmington, CT 06032. The Alderson-Ford Funeral Home of Waterbury 496 Chase Avenue has care of arrangements.
To order memorial trees or send flowers to the family in memory of Olive Sibold Crepon, please visit our flower store.