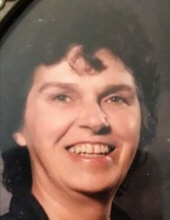 CHESHIRE- Nancy N. Bailey, 87, passed away Thursday, August 22, 2019, at Mid-State Medical Center. She was the widow of Harry Bailey who predeceased her in 2004.

Nancy was a Supervisor at Pratt and Whitney prior to her retirement. In her free time she was an avid Boston Red Sox fan, bingo player, and loved to read.

Mrs. Bailey is survived by her children Philip and his wife Dianne Bailey of Ponte Verda Beach, FL, John and his wife Nanette Bailey of Mercer, PA, James and his wife Mugsie Bailey of Marblehead, MA, and Cynthia Cogle of Cheshire; her sister Virginia Harris of Syosset, NY; nine grandchildren; and seventeen great grandchildren. She was predeceased by her brother Paul Nutter and sister Anna Fox.

All services for Nancy will be private and held at the convenience of the family. The Alderson-Ford Funeral Home of Cheshire, 615 South Main St, 06410 is assisting the family with the arrangements.
To order memorial trees or send flowers to the family in memory of Nancy N. Bailey, please visit our flower store.