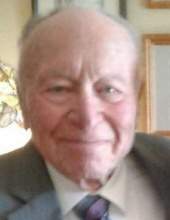 BRISTOL - Morris Eisenberg, 89, passed away on Friday, June 24, 2022, at St. Vincent's Medical Center. He was the husband of the late Janice (Kimmel) Eisenberg and the longtime companion of Barbara Hungerford.

Mr. Eisenberg was born May 24, 1933, in the Bronx, the son of the late Julius and Lena (Greenberg) Eisenberg. He was Executive Vice President and Chief Financial Officer for the former North American Bank. He was active in the Waterbury community serving on the Waterbury Development Authority and the Republican Town Treasurer. He volunteered for both St. Mary’s Hospital and the Alzheimer’s Assoc. As a man of faith, he served on the board of Beth El Synagogue in Waterbury, the former Kol Ami in Cheshire and the Gishrei Shalom Jewish Congregation in Southington. He was an avid photographer and painter of watercolors.

Besides Mrs. Hungerford, he is survived by his daughter Stacey Eisenberg of Waterbury; his nephews David and Stuart Ungar and their families; his brother-in-laws Harold Ungar and Sidney Kimmel; his close cousin Sandra Samuels; Barbara’s three children and their spouses as well as six grandchildren and seven great grandchildren. In addition to his wife and his parents, he is predeceased by his sister Shirley Ungar and his nephew Ben.

Arrangements - Services for Mr. Eisenberg will be held on Monday, June 27, 2022, at 10:30 am at the Alderson-Ford Funeral Home of Cheshire, 615 South Main St. Burial will follow at Beth El Cemetery. Memorial contributions may be made to Alzheimer’s Association, 200 Executive Blvd., Southington, CT 06489-1058, or to Gishrei Shalom Jewish Congregation, 37 Main St., P.O. Box 777, Southington, CT 06489.
To order memorial trees or send flowers to the family in memory of Morris Eisenberg, please visit our flower store.