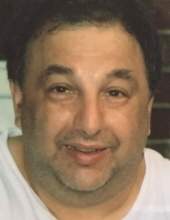 Michael E. Leo, age 64, of Meriden was received into the arms of his Lord and Savior, Jesus Christ on Wednesday, July 28, 2021 at the West Haven VA Medical Center after a courageous battle with cancer. He was the devoted husband of Ewa (Janula) Leo for over 36 years. Michael was born on February 8, 1957 in Meriden, son of the late Rocco and Rosalie (Gambino) Leo.

A lifelong resident of Meriden, he was a graduate of Platt High School and went on to serve his country with honor and pride with the US Marine Corps. Michael was employed by Pratt & Whitney and also Fad Tool Co., he was a proud tool and die maker for over 40 years. His greatest achievement was his love and service to Jesus Christ and the Wallingford Church of Christ, both of which he served willingly.

In addition to his wife, Ewa, he is survived by his daughter and son-in-law, Stephanie M. and David C. Griswold of Meriden; his two sisters, JoAnne Leo and Gina Leo of Meriden; his two grandchildren, Noah Michael and Greyson Scott Griswold; many loving cousins and extended family in Poland.

Friends are invited to greet his family at the Alderson-Ford Funeral Home of Cheshire on Friday, August 6, 2021 from 10:30 AM until 11:30 AM. At 11:30AM his funeral service will be held at the funeral home. Interment, with Full Military Honors, will follow at 2:00 PM in the CT State Veterans Cemetery, 317 Bow Lane, Middletown, CT. Memorial contributions may be made to Veterans Health Administration, 950 Campbell Avenue, T-3 West, West Haven, CT 06516, please list “Hospice” along with Mike’s name in the memo. To leave online condolences for his family, or to share a story of Michael, please visit www.fordfh.com
To order memorial trees or send flowers to the family in memory of Michael Edward Leo, please visit our flower store.