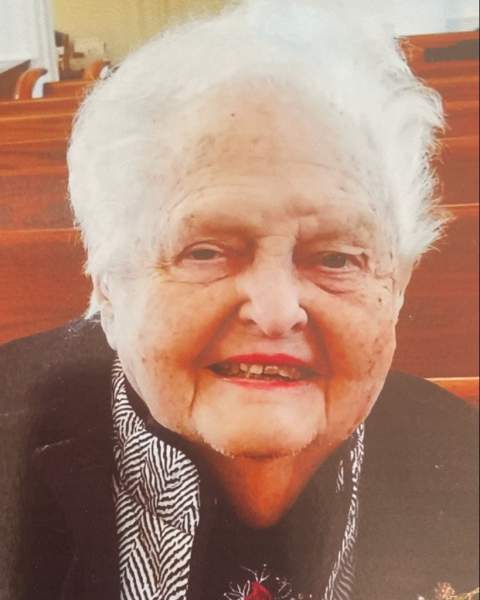 Mrs. Volker was born December 11, 1920, in Bridgeport, the daughter of the late Robert and Lucy (Burdick) Smith.  She grew up in Southington and graduated from Lewis High School in 1938.  In her 20s she was a bank secretary until she met and married her late husband Aloysius.

When her three children were small she was a wonderful homemaker and mom.  In the late 1970s, she joined the City of Meriden School System and held various positions until her retirement in 1994.  In retirement, she was a longtime volunteer at Mid-State Hospital and Masonicare in Wallingford.

She had many talents and hobbies including baking, knitting sewing, reading and golf.  The most important part of her life was being an active member of Center Congregational Church in Meriden.  Through the years she served her church in various ways.  She was the Collector; a Deaconess; the “Cheese and Nut” Chairperson for over 20 years for the Christmas Fair; an active member of the Handbell Choir for decades as well as many other activities.  She was the church’s oldest living member.

Mrs. Volker is survived by her daughters Susan Sanoski and her husband Paul of Downingtown, PA; Judith Sullivan and her husband Ed, of Cheshire, and Cynthia Volker of New London, NH; her step-son Mike Volker of OH; her grandchildren  Mary Kate Prince of PA, James and Colin R. Sullivan of Hamden; her great grandchildren Olivia, Owen, and Jack Prince.  In addition to her parents and her husband, she is predeceased by her infant son; her brother Robert Smith; her infant grandson Kevin Edmund Sullivan and her best friend of 93 years Toni (Chaffee) Giles Height.

Arrangements – A Memorial Service will be held on Wednesday, September 7, 2022 at the Center Congregational Church of Meriden, 474 Broad St. at 12 noon.  Burial will be held at the convenience of the family in Walnut Grove Cemetery in Meriden and there are no calling hours.  The Alderson-Ford Funeral Home of Cheshire is assisting with arrangements.  Memorial Contributions may be made to the Center Congregational Church of Meriden, 06450.