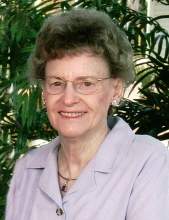 Mary Louise McLain, age 90, of Cheshire, formerly of Urbandale, Iowa, entered into rest on Monday, September 21, 2020 at MidState Medical Center in Meriden. She was much loved by her family and friends and will be greatly missed, especially by her best friend and husband of 68 years, Richard L. “Dick” McLain.

Mary was born on April 22, 1930 in Clear Lake, Iowa, daughter of the late John and Viola (Jorgensen) Read. She met Dick while roller skating near Iowa State University, where he attended school and she worked, and they soon began their romance. Later, as a reporter and photographer for the West Des Moines Express newspaper in West Des Moines, Iowa, and an educator on the Orphan Train Movement, Mary always had a story to tell. She also lovingly told stories through the quilts she made for her family.

In retirement, Mary and Dick enjoyed traveling in their RV, spending winters in Arizona, polka dancing, and gardening. In 2015, they moved to Cheshire and became a part of the Elim Park Community.

In addition to her husband Dick, Mary is survived by her children Susan Kellogg and her husband, Dr. Michael Kellogg of Cheshire, and David McLain and his wife, Denise of Concord, NC. She also leaves her cherished grandchildren, Eileen McLain, Alex and Will Kellogg, and Kyle, Travis, and Read McLain; her sister, Shirley Daw of CA; and brother-in-law, Gene Zinn of IL. Mary was predeceased by her son, Stephan McLain; her sister, Pat Rude; and her brothers-in-law, Art Daw and Virgil Rude.

The Alderson-Ford Funeral Home of Cheshire has been entrusted with her arrangements. To leave online condolences for Mary’s family, please visit www.fordfh.com
To order memorial trees or send flowers to the family in memory of Mary Louise McLain, please visit our flower store.