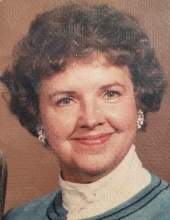 NAUGATUCK - Mary Elizabeth Mannweiler passed away peacefully at her home on March 2, 2021, she was 104 years old.

Mary Elizabeth attended Miami University in Oxford , Ohio from 1935 - 1937 and received a degree in Fine Arts. While attending Miami University she was a member of the Delta Gamma Sorority. There she met Robert Lang whom she would later marry. She went on to become an accomplished portrait painter. She enjoyed painting well into her 90's.

She and Robert ( Bob) enjoyed Sunday morning breakfasts at Jones Beach and summering in Maine at Webb lake. Upon moving to Woodbury Ct. they became very involved in the North Congregational church and also enjoyed square dancing at the old town hall.

Besides her love of art, she was an avid bridge player, playing regularly at the North Congregational church then later at the Woodbury senior center well into her mid 90's.
She found love again with Gordon Bannatyne Mannweiler and were married in April of 1981.
She became a stepmother to Gordon's son the late Mark Mannweiler.

Mary Elizabeth and Gordon lived life to the fullest and enjoyed traveling around the world, dining out regularly with family and friends. They wintered in their home in St. Thomas while graciously having a house full of guests.

Among her many accomplishments, nothing was more important to her than family. She enjoyed hosting many holiday gatherings at her home and watching her great-grandkids play. She never really like to be reminded of her age but happily embraced her 100th birthday bash surrounded by family and friends who traveled from all over the country to celebrate her incredible milestone.

Anyone who knew her would agree her smile was infectious and could light up a room.
Mary Elizabeth was very active in many organizations. She was past president of Athena Women's club in Freeport, NY, member of the Daughters of the American Revolution ( Ruth Floyd Woodhall Chapter) in Freeport . She was past President of the Woodbury Womens club from 1977-1978 and a long-term member. A member of the Watertown Art League, Past Director Waterbury Symphony Orchestra, trustee of the Naugatuck YMCA, and member of the scholarship committee of Naugatuck High School and received the Paul Harris Rotarian award.

Besides her children and their spouses, she is survived by her beloved grandson Ted Crawford wife Nancy and her great-grandchildren Emily Crawford and Sean Crawford and many nieces and nephews, Dean Rushmore, Ginny Formidoni, Brent Emery, Laureen Weibe, David Post, and Dick Post as well as great-grand nephews and nieces.
Mary Elizabeth will be greatly missed by her friends and family, She lived a full life, remaining independent and active well into her 90's. The family wished to thank her long-time care giver's.

Arrangements -Services will be private with a memorial service later in the year. The Alderson-Ford Funeral Home of Naugatuck is assisting with arrangements. Donations may be made to the Naugatuck YMCA, 284 Church St., Naugatuck, CT 06770 or to the Mattatuck Museum, 144 West Main Street, Waterbury, CT 06702 or to the Waterbury Symphony Orchestra, 160 Robbins St., Waterbury, CT 06708 or to the CT Junior Republic, 550 Goshen Rd., Litchfield, CT 06759.
To order memorial trees or send flowers to the family in memory of Mary Elizabeth Mannweiler, please visit our flower store.