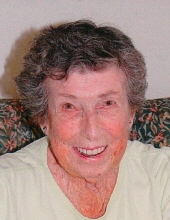 WALLINGFORD- Margaret Hindinger Boutwell, 96, passed away Tuesday, June 22, 2021 at her residence. She was the widow of Harvey Boutwell who passed away in 2006 after 60 years of marriage.

Margaret was born November 19, 1924 in New Haven, daughter of the late George and Margaret Hindinger.

Peg was raised on the family farm in Hamden, CT. In 1947 she moved to Concord, NH after marrying Harvey. They returned to Cheshire, CT in 1963. In 1988 Sanibel, FL became their winter getaway. In 2008 Peg found a new home at Ashlar Village.

Peg was a member of the first women's basketball team at Larson College (now Quinnipiac) and enjoyed being on the jumbo-tron when she celebrated her 90th birthday at a women's game. Peg and Harvey were avid recreational and competitive bridge players and developed lifelong friends having a great time with the Crazy Eights and Terrible Twelves. Many Yale football games and tailgates were enjoyed over the years. They also had a network of friends around the country and the world through the Institute of Transportation Engineers and Peg was a ringleader for many of the social events. Peg loved to cook and many holiday meals were shared with the Boutwells, Hindingers and Kolayas. Unofficial, after hour swims at Kings Crown in Sanibel will be cherished memories as will the trunkful of Christmas presents for the grandkids. Peg was truly blessed to have lived a long, full, active life.

Starting in February 2020, our lives have been blessed knowing that Peg was loved and cared for by Enid, every hour of every day. This included Enid preparing her daily 4:00 "dry rob roy." During the past three months we are also thankful for the hospice caregivers who supported Peg in her final days.

All services will be private and held at the convenience of the family. The Alderson-Ford Funeral Home of Cheshire, 615 South Main St, 06410, is assisting the family with the arrangements. In lieu of flowers donations in her name can be made to The Masonic Charity Foundation of CT, Inc., PO Box 70, Wallingford, CT 06492, www.Masonicare.org, to benefit patients and residents in need at Masonicare.
To order memorial trees or send flowers to the family in memory of Margaret Hindinger Boutwell, please visit our flower store.