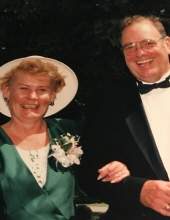 CHESHIRE; Madeline (Keough) Drew, 84 of Cheshire and East Otis, MA passed away Wednesday March 30, 2022 at the Hebrew Center for Health and Rehabilitation in West Hartford. She was the wife of the late Roger C. Drew who predeceased her in 2003.

Madeline was born July 16, 1937 in Pawtucket, RI, a daughter of the late John and Madeline (Strom) Keough and was a longtime Cheshire resident. She was a member of the first graduating class of Cheshire High School and earned her Bachelor Degree in Education from Southern Connecticut State University. Madeline was a teacher for several area school systems, retiring after many years of service. She was a member of the Cheshire Garden Club, the Junior Women’s Club and was an active member of St. Peter’s Episcopal Church in Cheshire, where she was involved in several of the church’s activities. Madeline and Roger retired to their lake home on Otis reservoir in the mid 90’s and made many happy memories in Otis and the Berkshires. After Roger’s passing, Madeline spent much time with her immediate family and friends and returned to Cheshire. She loved gardening and playing tennis. Maddie never missed an opportunity to buy a new outfit and enjoyed her weekly shopping trips. In her final years, it gave her great pleasure to attend her grandson and great grandson’s baseball games and trips out for ice cream. Maddie, Mom and More Nan will be dearly missed by all. She was the best!

A memorial service in celebration of Madeline’s life will be held Saturday April 9, 2022 at 10:30 a.m. at St. Peter’s Episcopal Church 59 Main Street in Cheshire. Burial will follow in St. Peter’s Cemetery. There are no calling hours. Memorial contributions in Madeline’s name may be made to the Alzheimer’s/Dementia Association of Connecticut 200 Executive Blvd S #4B Southington, CT 06489 or to St. Peter’s Episcopal Church. The Alderson-Ford Funeral Home of Cheshire 615 South Main Street has care of arrangements.
To order memorial trees or send flowers to the family in memory of Madeline (Keough) Drew, please visit our flower store.