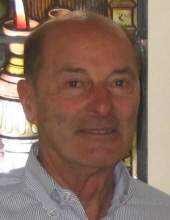 Louis Anthony Ricciuti, Sr. (March 22, 1934 - December 10, 2020) passed in his Cheshire home of over 50 years. Devoted to his family, he made endeavors in the insurance and restaurant industries, before eventually owning and operating English Furniture of Hamden for over 30 years with his wife, Mary Ann. Lou also served faithfully as a Eucharistic Minister at St. Bridget Church for many years. Affable and restless in retirement, Lou delivered flowers and auto parts, Holy Communion to those unable to attend mass, and surprise donuts and other treats to his grandchildren, while attending many of their sporting events and concerts.

Lou attended Cheshire Academy, where he played football and baseball. He initially attended Fordham University before graduating from Boston University in 1960. Lou and Mary Ann married in 1963, with a reception at the famed Waverly Inn in Cheshire, which had been established by Lou’s parents, Louis D. Ricciuti and Edythe (Diorio) Ricciuti, and where he had worked with his family.

Passionately athletic, Lou participated in sports with his children and grandchildren (and nieces and nephews), even into his 80’s, including swimming in any body of water. Lou particularly sought out the Maine coast and a running launch into the icy Atlantic. Happiest when engaging with others, Lou loved any meal (even a bad one) and attending sporting events with family and friends. Lou’s children never ceased to hear about the warmth of an interaction with Big Lou. We will miss his sweetness, his faithfulness, his gardening and grilling, and other simple moments, such as how he loved to discuss the plan for the next meal during the current one, because "we will all get together again soon."

Lou was loved deeply by his family: his wife, Mary Ann (Fazzone) Ricciuti; his son, Louis Ricciuti, and partner, Jesica Wardwell, of West Hartford; his son, Phillip Ricciuti, of Hamden; his daughter, Lauren Wegerbauer, and husband, Michael Wegerbauer of Wayland, MA; his seven grandchildren, Anna, Lia, Nicholas, Bridgette, and Charlotte Ricciuti and Michael and Julia Wegerbauer; his sister, Jean Emily Penta of Madison; and his brothers and sisters-in-law, cousins, nieces, and nephews. Lou was predeceased by his sister, Edythe Hallinan.

Arrangements – A Mass of Christian Burial at St. Bridget Church/St. Bridget of Sweden Parish with committal service in St. Bridget Cemetery will be held at the convenience of the family and there are no calling hours. The Alderson-Ford Funeral Home of Cheshire is assisting with arrangements. Memorial contributions may be made to St. Bridget Church/St. Bridget of Sweden Parish, 175 Main St., Cheshire, CT 06410. Lou's family is planning a mass for the Summer and will invite family and friends to attend.
To order memorial trees or send flowers to the family in memory of Louis Anthony Ricciuti, please visit our flower store.