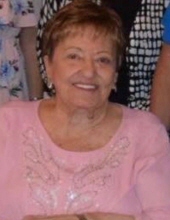 HAMDEN - Loretta Rotell, 87, passed away peacefully, August 9, 2020 surrounded by her loving family. She was the wife of Joseph Rotell.

Loretta was born August 4, 1933 in Dickson City PA, to the late Paul and Viola (Dzvileski) Polanin. Loretta was a graduate of Scranton State Hospital School of Nursing and began her career at Lennox Hill Hospital in New York City. After moving to Connecticut, she had a 35 year career as an RN, retiring as a Nurse Manager at Griffin Hospital in Derby.

Loretta possessed a strong faith. She cooked often and was a baker and candy maker as well. She presided over the family’s annual Christmas pierogi assembly line, supervising her grandchildren in the traditional methods. She read voraciously and was known for her beautiful lion collection as she was a Leo. Loretta and Joe traveled and spent many winters in the Pompano FL area making many friends over the years.

Most importantly, Loretta was surrounded constantly by her friends and family, who adored and who she loved fiercely and unreservedly. Her generosity and strength of character have bettered the lives of all who loved her.

Besides her loving husband of 65 years Joseph Rotell, she is survived by her daughters Cindy (Phil) Spadaro, Tammy (Michael) Amore; her son Jay (Jodie) Rotell; her six loving grandchildren Nicole (Chris) Hines, Amanda (Michael) Bolognia, Kristen (Joseph) Abraham, Michael (Colby) Amore, Jason Rotell and Jessica Rotell. She was blessed with three great grandchildren (all born within 5 months of each other in 2018) Tommy Abraham, Rocco Bolognia and Brooklyn Hines whom she adored. She is also survived by a brother Bernard Polanin and a sister Terri Smith. In addition to her parents, Loretta was predeceased by her brother Chet Polanin.

The family would like to thank Connecticut Hospice for their wonderful care of Loretta.

Arrangements – Funeral services and burial will be held at the convenience of the family and there are no calling hours. The Alderson-Ford Funeral home of Cheshire is assisting with arrangements. Memorial contributions may be made to Connecticut Hospice, 100 Double Beach Road, Branford, CT 06405.
To order memorial trees or send flowers to the family in memory of Loretta J. Rotell, please visit our flower store.