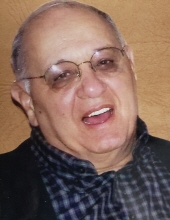 BEACON FALLS – Leonard F. D’Amico, 87, passed away Thursday, April 30, 2020 at the Lutheran Home of Southbury. He was the husband of the late Harriet "Re" (Campbell) D’Amico.

Mr. D’Amico was born March 4, 1933, in Waterbury the son of the late Joseph and L. Marie (Iorio) D’Amico. He was raised and educated in Waterbury and after graduation from Crosby High School, he served his country in the U.S. Navy during the Korean War, aboard the U.S.S. Wright (CVL-49), Aircraft Carrier. Upon his honorable discharge, Mr. D’Amico served the City of Waterbury as a Police Officer, for seven years and went on to work as a sales representative for International Harvester, Truck Division for fourteen years then going on to work for Checkmark Office Supply.

In 1973, Mr. D’Amico was elected to the Board of Selectman, and in 1977 he was elected as First Selectman (Mayor) for the town. In 1985, he was honored by the Federal Environmental Protection Agency with its Environmental Merit Award and the CT Society of Architects Award for his role on environmental issues. He served the community of Beacon Falls until November of 1995, when he was appointed by Gov. John Rowland to the Office of Policy and Management, as Under Secretary of the Policy Development and Planning Division. He retired in 2000. He is a member of the Schaffer-Fisher American Legion Post No. 12 and is an honorary member of Beacon Hose Company No. 1.

He was active in many Masonic groups. He was a member and Past Master of Euclid Lodge No. 135, A.F. & A.M. in Waterbury, serving as Worshipful Master of the Lodge in 1969; a member of the Fellowcraft Association, having served as Master of the Square of Quarry No. 49., and later as a member the Board of Trustees and as a member of the Raymond S. George Fund Committee. He had also served as a member of the Temple Corporation for the Waterbury Masonic Temple. In 1987 he also affiliated as a member, with Shepherd-Salem Lodge, No 78 A.F. & A.M. in Naugatuck. He was also a member of the Scottish Rite Bodies, Valley of Waterbury with memberships in Doric Lodge of Perfection; Ionic Council, Princes of Jerusalem; Corinthian Chapter Rose Croix; and Lafayette Consistory 32nd Degree; Valley of Bridgeport and was made a Knight of the Royal Order of Scotland in 1969, in the Provincial Grand Lodge of the United States, at its Annual Communication in Washington, D.C. He then became affiliated with the York Rite Bodies, with membership in Eureka Chapter No. 22, Royal Arch Masons, and served the Chapter as Most Excellent High Priest in 1973, and the Order of High Priesthood in 1973. He had served the Grand Royal Arch Chapter of Connecticut as a member of the DeMolay Scholarship Committee. He was a member of Waterbury Council No. 21, Royal and Select Masters, and served as Thrice Illustrious Master in 1975, and received the Order of the Silver Trowel in the Council of Anointed Kings of Connecticut. He was Knighted in Commandery No. 7, Knights Templar, in 1968, and served as Eminent Commander for two consecutive terms, from 1974 to 1976, and had served as a member of the Board of Trustees and member of the Triangle Guard Association of the Commandery and is a Life Sponsor of the Knights Templar Eye Foundation.

He has also served the Grand Commandery of Connecticut on the York Rite Unity Committee, and had served on the Jurisprudence Committee. In 1968, he was created a Companion Knight in Connecticut York Rite College No. 17. His loyal service to the College was acknowledged on August 12, 1973, when the Sovereign York Rite College of North America, sitting in Detroit, Michigan, conferred upon him the Order of the Purple Cross and constituted him an Associate Regent. He has been further honored by having been elected to membership In Connecticut Priory No. 28, Knights of the York Cross of Honor in 1976 and served as Eminent Prior in 1983 through 1984, and made a Life Member of the Covent General, Knights of the York Cross of Honor of the following year. He had served as a Knight Preceptor- New Jersey Chapter, Order of Knights Preceptor and was elevated to Knighthood in Martin J. Allen Priory, Order of DeMolay, receiving their DeMolay Medal of Appreciation in 1983. He was a Charter member of Nutmeg Chapter, No. 106, Sword of Bunker Hill in 1983, and had also served as Pre-Eminent Governor of Connecticut College, No. 17. He was also a member of Mohawk Council, Knight Masons of the United States and Nathan Hale Council – Allied Masonic Degrees. He became a member of Societas Rosicruciana In Civitatibus Foederatis, Conn. College in 1984. He was a Knight Companion in St. Andrew's Conclave, Red Cross of Constantine, later serving as Puissant Sovereign in 1985, and was made a Knight Crusader of the Cross in 1986. He had served as Intendent General - Division of Conn. from 1995 -2006.

He has served on the Board of Managers of the Masonic Charity Foundation from 1976 to 1989. Then serving as Right Eminent Grand Commander of the Grand Commandery of CT in 1982-1983. He was granted Emeritus Status on July 15, 1989. He was appointed to the Grand Lodge of Conn. in 1993 and was appointed Grand Representative of the Grand Lodge of Indiana to CT, by Most Worshipful Grand Master, William F. Carpenter in 1997, and also Grand Representative to the Grand Commandery of North Dakota to Conn, later servicing as Grand Representative of Mass. and Rhode Island to Conn. And was formerly a member of the Forty-Fivers Assoc. of Past Grand Commanders. He was created a Knight Commander of the Temple of the Guard Encampment. Knights Templar of the United States in 1992. He served the Grand Lodge of CT, as Most Worshipful Grand Master of CT, from 2000 - 2001. He was Coroneted a Sovereign Grand Inspector General - 33rd degree in 1987, and as an Honorary Member of the Supreme Council A.A.S.R.–Northern Masonic Jurisdiction, which is the highest honor in Masonry.

Formerly active with the Shrine. He was a former member of Sphinx Temple A.A.O.N.M.S., of Newington; the Police Square Club of Connecticut, Dimaryp Court Royal Order of Jesters, and the Naugatuck Shrine Club and a member of the Twilight Club of Bridgeport. For his outstanding contribution to Freemasonry in this State, and his continuing service to the Fraternity, Past Most Worshipful Master Leonard Francis D'Amico was presented the “Pierpont Edwards Medal” in Bronze in 1976.

Arrangements – A Memorial service with military honors will be announced at a later date. Mr. D’Amico’s graveside service will be streamed live via the Alderson-Ford Funeral Home’s Facebook page at 11:30 am on Wednesday, May 6, 2020, from Grove Cemetery in Naugatuck. Prior to graveside services, a funeral procession to honor Mr. D’Amico will proceed through Beacon Falls at approximately 11 am on Wednesday. Memorial contributions may be made to the Beacon Falls Congregational Church, 69 Wolfe Ave., Beacon Falls, CT 06403 or to the Grand Lodge Permanent Endowment Fund, 69 Masonic Ave., Wallingford, CT 06492.
To order memorial trees or send flowers to the family in memory of Leonard F. D'Amico, please visit our flower store.