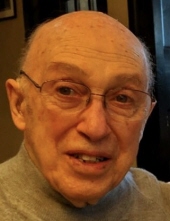 CHESHIRE- Leo R. Mirabelli, 99, of Cheshire, passed away on May 4, 2019 after a brief illness with his loving family by his side.

Born in New Britain on March 29, 1920, Leo was the oldest child of the late Joseph and Catherine (Lanciano) Mirabelli. Leo attended New Britain schools and was a 1938 graduate of New Britain High School. Leo was a World War II veteran, entering the Air Force on July 6, 1942. After attending radio and gunnery schools, he joined the Air Force Band while stationed in Dalhart, Texas. During one of his first military band engagements, he met the love of his life, Margaret P. Carter, whom he married on November 10, 1943. They were very happily married until Margaret’s passing on October 20, 1975. Leo and Margaret were blessed with two daughters, Cathy Berryman and Mary Sue Mollison and a son, Gregory J. Mirabelli.
Leo was an Accountant for Fuller Brush Company and later at Stroehman Bakeries, from which he retired in 1990. Leo received his greatest pleasure, however, from his music. He played saxophone and clarinet beginning in his school days. For many years, he was part of a small dance band orchestra called the Music Masters Orchestra. He also marched in many local parades and played in many concerts and musical engagements over the years. Leo was also an avid sports fan. He never missed a UCONN Women’s basketball game and was a New York Yankees fan his entire life.

Leo married his second wife, Dorothy (Hecox) Maillette on May 27, 1978. She predeceased him on August 6, 2013. Leo was very fond of her son and daughter-in-law, Ronald G. and Marie Maillette and their son, Erik and his family.

Leo’s family would like to say a very special thank you to Bob and Melinda Formica and their family who lived next door to their Dad and were so very kind and generous to him over the years. They would also like to extend a special thank you to Dr. Kenneth Schwartz and the medical staff on the critical care unit at Mid-State Medical Center.

Visiting hours will be 4 to 7 P.M, Wednesday, May 8, 2019 at the Alderson-Ford Funeral Home of Cheshire, 615 South Main Street (Rt. 10). Mr. Mirabelli’s funeral will start 9:15 A.M, Thursday, May 9, 2019 from the funeral and proceed to St. Bridget Church, 175 Main St, Cheshire, 06410 for a Mass of Christian Burial at 10 A.M. Burial with full military honors will be at St. Mary’s Cemetery in New Britain. Memorial donations may be made in Leo’s memory to Meals on Wheels, Western Connecticut Area Agency on Aging, 84 Progress Lane, Waterbury, CT 06705.
To order memorial trees or send flowers to the family in memory of Leo R. Mirabelli, please visit our flower store.