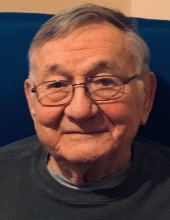 YARDLEY, PA – Lawrence E. Sobolewski, 84, formerly of Cheshire, passed away Thursday August 22, 2019 at St. Mary’s Medical Center in Langhorn, PA. He was the husband of the late Shirley S. Sobolewski who passed away on July 19, 2008.

Mr. Sobolewski was born September 19, 1934 in New Haven, the son of the late Charles and Valeria (Nowakowski) Sobolewski. He was a longtime Cheshire resident where he was a communicant of Church of the Epiphany. In February 2018 he moved to Yardley, PA to be closer to his family.

After his honorable discharge from his 8 year enlistment in the Air Force, Mr. Sobolewski attended Los Angeles City College & graduated with a Master’s Degree from Southern Connecticut Stated University. He lived a life of service both in the Air Force during The Korean War & in his career as an educator & later High School Guidance Counselor.

He will be remembered for his humor and love of his family. He enjoyed fishing, music (especially Frank Sinatra), Broadway Musicals, and singing in the Church Choir.

Mr. Sobolewski is survived by his children David and his wife Jamie of Marlboro, NJ and Matthew and his wife of Cari of Chester Springs, PA; and daughter Amy Millimet and her husband Zachary of Alexandria, VA; seven grandchildren Connor, Brooke, Liam, Riley, Molly, Gavin and Shane.

Arrangements – Funeral services will be held on Saturday August 31, 2019 at 12:00 pm at the Alderson-Ford Funeral Home of Cheshire, 615 S. Main St. Burial will follow in Cheshire Hillside Cemetery. Visitation will be held on Saturday from 10:30 am until the start of the service. Memorial contributions may be made to The American Heart Association, P.O. Box 417005, Boston, MA 02241.
To order memorial trees or send flowers to the family in memory of Lawrence E. Sobolewski, please visit our flower store.