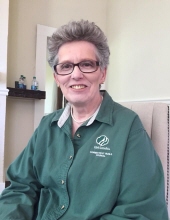 Karen Lee (Carlson) Hoffman, 72, of Cheshire, passed away on May 24, 2020 at Benchmark Senior Living in Hamden after several years battle with Alzheimer's disease. She is survived by her husband of 45 years, Craig Hoffman, of Cheshire.

Karen was born in Waterbury on August 5, 1947, the daughter of the late Carl and Eleanor Carlson. Raised in Naugatuck, she graduated from Naugatuck High School, Class of 1965 and attended Post College, taking classes in Accounting. After marrying Craig in 1975 they remained in Naugatuck until 1976 when she and Craig moved to Cheshire to raise their family. A devoted mother, Karen enjoyed spending time with her daughters and often looked forward to traveling to see them after they moved away. Throughout her life she was very active within Girl Scouts of America, participating as a troop leader for her daughters, Service Unit Manager, and eventually serving on the Board of Directors for the Girl Scouts Connecticut Trails Council and Girl Scouts of CT for a number of years. She was also a CT Delegate at several Girl Scout National Conventions. Before retiring she had worked as a dealership auditor for Chrysler and then Ford Motor Co. Karen was a UConn Women's basketball enthusiast, an avid reader, and loved the movie The Sound of Music. She also liked spending time in and exploring the back roads of Vermont with Craig over many years.

Mrs. Hoffman will be dearly missed by her children: daughter Kimberly Hoffman and son-in-law Brian Morrison of Mooresville, NC, and daughter Sharon Hoffman of Lexington, SC. She is also survived by her sisters Pat (Carlson) Johnson of Leesburg, FL and Linda (Carlson) Gordon of Bullhead City, AZ, as well as numerous nieces and nephews.

Services and burial will be at a future date. In lieu of flowers, memorial contributions may be made to Girl Scouts of Connecticut, Fund Development Office, 340 Washington Street, Hartford, CT 06106 or by going to their website at https://secure.donationpay.org/gsofct/. The Alderson-Ford Funeral Home of Cheshire is assisting with arrangements.
To order memorial trees or send flowers to the family in memory of Karen Lee Hoffman, please visit our flower store.