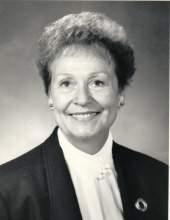 Joy Waldau Hostage passed away peacefully on September 18, 2020 in her apartment at The Orchards in Southington.
Joy Sandmann Waldau was born on August 2, 1925 in Detroit, MI, the second child of Maximilian and Augusta Waldau. Her early years were spent with family in Jamestown and Scarsdale, NY. She was educated at Northfield School (MA), Colby-Sawyer College (NH), and the Universities of Geneva and Zurich in Switzerland.
She was married for more than 65 years to Basil Arthur Hostage, Jr. until his death in 2016. Their wedding was on November 18, 1950 in the Asylum Hill Congregational Church of Hartford (CT). Cheshire became their home in 1952 and they became members of the First Congregational Church. Four sons, Basil, David, Mark, and Eric followed and grew up in the town.
Very active in community and church affairs, Joy was a leader in many civic groups, including the League of Women Voters, Cheshire Junior Women’s Club, and the Democratic Town Committee. The Cheshire Library Board and the Connecticut State Library Board benefitted from her services for many years. She was elected to six terms on the Cheshire Town Council.
From childhood on, summers were spent in the Adirondacks on Big Moose Lake, New York for her entire life. She taught at Sunday school and sang in the choir of the Big Moose Community Chapel. A lifelong water sports lover, she swam the length of the lake many times and joined the Big Moose Canoe Club to explore many rivers and lakes in the surrounding area.
Joy was predeceased by her husband Arthur, son Eric, and brother Roy. She is survived by her son Basil and his wife Vicky of Lingen, Germany, son David and his wife Susan of Cheshire, son Mark of Hamden, and daughter-in-law Laura of Bethlehem, PA. Her descendants include grandchildren Christopher, Andrew, Jessica, Hunter, and Max, as well as one great-granddaughter, Nancy Joy.
She was a great friend to those fortunate enough know her and a loving wife, mother, grandmother, and great-grandmother. She will be missed by all. Due to the current pandemic, a memorial service is postponed until next year. Memorial contributions may be made to Friends of the Cheshire Public Library (103 Main St., Cheshire, CT 06410) or to the Memorial Music Fund of the First Congregational Church (111 Church Drive). The Alderson-Ford Funeral Home of Cheshire is assisting with arrangements.
To order memorial trees or send flowers to the family in memory of Joy Waldau Hostage, please visit our flower store.