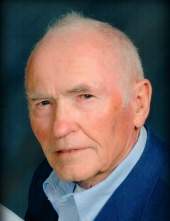 Joseph R. Madden of Elim Park in Cheshire passed away peacefully at home on December 15, 2021. He was the loving husband of Ann (Forlenzo) Madden for nearly 20 years.

Joe was born on January 15, 1927, in Waterbury, CT, the son of William and Josephine Madden. After growing up in Naugatuck, he served in the U.S. Army before graduating from the University of Connecticut with a degree in engineering and from Adelphi College with a Masters in physics. He loved his career as a professor teaching both physics and electrical engineering at Hartford State Technical College, where he at one time served as president of the teacher’s union. Prior, he worked in engineering at UTC Research Center, a division of Pratt and Whitney in E. Hartford, and at American Bosch Arma Corp in Garden City, NY, developing the first successful missile guidance system.

In addition to his wife, he is survived and dearly missed by his children, Susan Madden and partner Ralph of Phoenix, AZ, David Madden and partner Terry of Cheshire, Lisa Langer and husband Greg of Denver, CO; his wife’s daughters Nancy Walsh and husband Richard of Fulshear, TX, Cindy Forlenzo of Cheshire; sister-in-law Helen Klucznik of Noblesville, IN, and numerous nephews and nieces. He was blessed with six grandchildren (Valerie, Joshua, Justin, Benjamin, Patrick and Daniel) and four great-grandchildren (Lexi, Layla, Fayth and Grady).

Joe was an active member of the First Congregational Church of Cheshire, serving on various boards and as a deacon. He was a volunteer for the Partnership for Long Term Care for the Elderly for more than 15 years and volunteered assisting seniors with tax preparation through AARP for 20 years. He was a passionate gardener and competed in boxing, swimming and long-distance running, winning the Senior Olympics in his age division when he was 69 years old.
Joe was predeceased by his sister, Ellen Flaherty; brothers William, George and Edward; and his first wife of 40+ years, Ann (Schmidt) Madden.

Renowned for his wry wit and humble sarcasm, Joe wanted it mentioned at least 10 times in his obituary what a great guy he was. He joked that Heaven is a place with no computers. May this tenfold great and beloved man rest in peace … with no more passwords to remember.

Arrangements – A Memorial service will be held at a later date. His ashes will be laid to rest in a private ceremony at the First Congregational Church in Cheshire, to which contributions may be made in lieu of flowers. The Alderson-Ford Funeral Home of Cheshire is assisting with arrangements and there are no calling hours.
To order memorial trees or send flowers to the family in memory of Joseph Madden, please visit our flower store.